On September 29th, Bill Murray, along with German cellist Jan Vogler & friends, will release an album called New Worlds, where the actor will be belting out Bernstein and Gershwin and reciting poetry.

The project came about after Murray met Vogler on a flight from Berlin to New York. The chance encounter sparked a friendship based on their mutual love for music and literature. After several additional meetings, Murray and Volger decided to release an album with violinist Mira Wang and pianist Vanessa Perez. 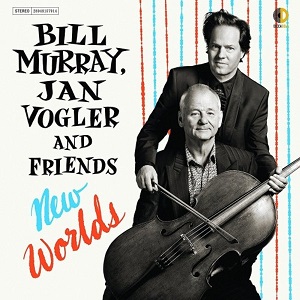 Tracklisting:
Johann Sebastian Bach – “Prelude” from “Cello Suite No. 1 in G Major, BWV 1007″”
Walt Whitman – “Song of the Open Road” and “Song of Myself”
Stephen Foster – “Jeanie with the Light Brown Hair”
Ernest Hemingway “With Pascin at the Dome” from A Moveable Feast
Astor Piazzola – “La Muerte del Angel”
George Girshwin – “It Ain’t Necessarily So” from Porgy & Bess
Astor Piazzolla – “Oblivion”
James Fenimore Cooper – selection from The Deerslayer
Maurice Ravel – “Blues” from “Sonata for violin and piano No. 2”
James Thurber – “If Grant Had Been Drinking at Appomattox” from Writings and Drawings
Henry Mancini – Arr. Grafe 5 “Moon River”
Mark Twain – selection from The Adventures of Huckleberry Finn
Leonard Bernstein – Arr. Stephen Buck “Somewhere,” “I Feel Pretty” and “America” from West Side Story

Murray and the musicians will embark on a tour beginning in October. A list of dates can be found below.