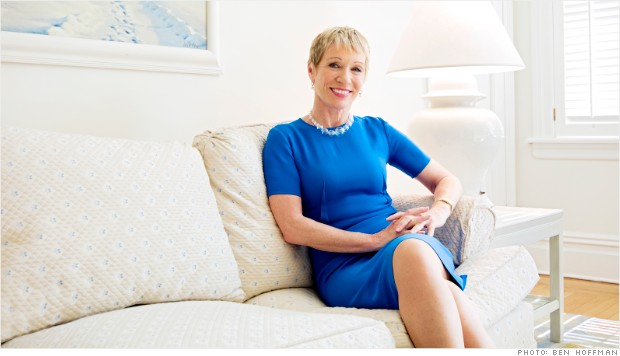 Barbara Ann Corcoran’s story is the story of the American Dream. The second-oldest of ten children, Barbara grew up in Edgewater, New Jersey. Her father a printing-press foreman and her mother a housewife, Corcoran graduated high school and enrolled in St. Thomas Aquinas College, graduating in 1971, and began the first female-owned real estate firm in New York City two years later with a $1,000 loan. The firm was hugely successful, and Corcoran ended up selling the business in 2006 for an astounding $66 million. Corcoran has since become a popular television personality, with regular roles on ABC’s Shark Tank and NBC’s Today show, has written a number of bestselling business and real estate books and is a highly coveted motivational speaker.

Barbara often likes to point out that she struggled to earn straight D’s in high school, as a way to illustrate that grades aren’t everything. Despite her barely passing marks in school, Corcoran claims she had 20 jobs before she turned 23, evidence that hard work can overcome academic ineptitude. After college, Barbara began dating a New Jersey-based home builder, Ray Simone, whom she met at a diner where she was employed as a waitress. Shortly after they met, Simone extended a $1,000 loan to Corcoran, and the couple formed Corcoran-Simone, essentially an apartment locator service. Corcoran acted as the rental agent, while Simone owned 51 percent of the company. Corcoran was showing rentals to a Union Carbide engineer one day, and the engineer decided to buy rather than rent. The sale generated a commission of $3,000 for Corcoran-Simone, and Barbara decided to shift the firm’s focus to sales, posting an ad for a sales agent the following day.

Corcoran’s early success in real estate was based on a simple system. In the early days, it cost $180 to post a three-line ad in the New York Times. So every time Corcoran got her hands on another $180, she would hire a new agent. Within two years of founding Corcoran-Simone, the company was only doing sales and employed 14 agents, generating over a half million dollars in sales. It was shortly after the company shifted to sales only that Ray met another woman and told Barbara he was marrying her. Dividing the company took several years, and was completed in 1978. According to Barbara, Ray fueled her desire to prosper alone when he said that she would never succeed without him. Corcoran founded the Corcoran Group, the first female-owned realty firm in the Big Apple, expanding to a workforce of 7 agents and over $350,000 in revenue in just her first year.

Corcoran Group thrived under Barbara’s leadership, thanks in large part to her unique style. Despite being the firm’s founder, she leaned on her agents extensively. She often says that she never knew what the firm’s revenue was, having delegated accounting duties to Esther Kaplan, the first agent she brought in. Corcoran eventually rewarded Kaplan’s hard work with a 10 percent commission in the firm, allowing her to cash in when the firm was sold. The Corcoran Group began selling real estate on the Internet in 1993, two years before most of her New York competition. She also had the foresight to snatch up Web domains that would likely be coveted by her competitors so that they would have to call her when they wanted to begin selling on the Web. Barbara never charged her competitors for the domains, she says, but did benefit by being alerted whenever a rival entered the online space.

Corcoran married her second husband, Bill Higgins, in 1988, and almost immediately the couple began trying to have a child. Corcoran eventually began seeing a fertility doctor, and was finally able to give birth following eight years of treatment. The couple’s son Tommy was a dream come true for Barbara, and also a major factor in her decision to sell the Corcoran Group. Barbara says the decision to sell began in 2001, when she noticed that her firm had more listings in every category than any of her competitors. That was the first time Corcoran realized she had achieved her goal of becoming the top broker in New York, and also led to an epiphany. As Barbara puts it, she realized she needed to be there 150% for her family at the Corcoran Group, while also being there 150% for her son. Since she couldn’t do both, Barbara decided it was time to sell.

With a staggering sales force of 850 agents and annual revenue approaching $100 million, the Corcoran Group got a lot of interest from area real estate firms. New Jersey-based NRT Inc. (now a subsidiary of Realogy) was actively buying up firms in the city, however, so Corcoran decided that they were her buyer. She cleverly hired an attorney who was also a member of NRT’s Board of Directors. The attorney went to NRT executives for an offer, calling Barbara a few days later with a $20 million figure. Barbara simply said that she wouldn’t take less than $66 million, later explaining that 66 is her lucky number, and told the lawyer not to call back unless he found a buyer at her price. A contract was signed just a few days later, and the sale was completed in less than two weeks.

With her exit from the New York real estate market, Barbara quickly learned that she missed the attention and missed being around people. She quickly set out to write her first book, If You Don’t Have Big Breasts, Put Ribbons on Your Pigtails, and began her TV career about a year later. Her first job, as a political consultant with Fox, was short-lived, so she joined the cast of Good Morning America as a real estate contributor. She assumed the same role for the Today show in 2007, and has been there ever since. A couple years later, she was offered a spot as one of the investors on Shark Tank, which she quickly accepted. Shark Tank is a reality show featuring several investor “Sharks,” who listen to presentations from entrepreneurs before deciding whether to invest their own money for a stake in the business. Since joining the Shark Tank, Corcoran has invested in 22 businesses, playing a pivotal role in their growth. Barbara currently lives with her husband and two children in New York City and is active on the motivational speaking circuit and still appears regularly on Shark Tank and Today.