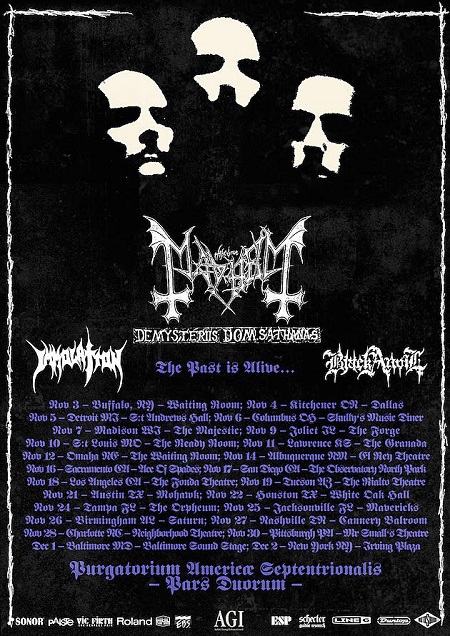 Norwegian black metal band Mayhem recently launched their U.S. tour on November 3rd in Buffalo, NY, along with Immolation and Black Anvil. On the trek, Mayhem will be performing their classic 1994 debut album De Mysteriis Dom Sathanas in its entirety. Tonight the tour stops at Mohawk in Austin, TX. A list of dates can be found below.

About the tour, Immolation vocalist/bassist Ross Dolan commented: “It is an honor for us to be sharing the stage with the band that truly pioneered the Norwegian black metal scene.”

Although the songwriting process for De Mysteriis Dom Sathanas began in 1987, the album was not officially released until 1994 due to the suicide of vocalist Per “Dead” Ohlin and the murder of guitarist Øystein “Euronymous” Aarseth. It is widely considered one of the most influential black metal albums of all time.