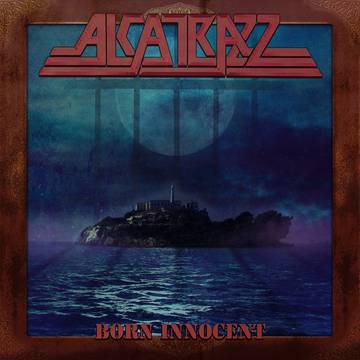 The hard-hitting, melodic heavy metal band Alcatrazz celebrates RSD Drops 2021 with the release of a colored double vinyl edition of their latest studio offering, Born Innocent. The 13-track opus, having previously only been available on CD and digital formats and never on vinyl will be a must-have collectible for anyone who considers themselves a fan of rock (pun intended!)

Their first studio venture since 1986’s Dangerous Game. Alongside the unique vocal prowess and range of star frontman and founding member Graham Bonnet, Born Innocent also features fellow founding members, Jimmy Waldo and Gary Shea. And from the classic album art, featuring the mighty rock itself, Born Innocent is a journey into the sort of heavy, melodic, and supremely articulated hard rock that is a cornerstone of the likes of Rainbow and the Michael Schenker Group, territory Alcatrazz successfully strode in the ‘80s before going on hiatus.

Born Innocent was produced by Jimmy Waldo with Giles Lavery and mixed and mastered by Andy Haller and features many former stars from Graham’s long career. Guest appearances include Chris Impellitteri, who wrote the music and played all guitars on the arpeggio-powered “Born Innocent”, with Bonnet’s vocals soaring to old-school heights, as did Bob Kulick for the majestic “I Am The King”. Virtuoso Japanese guitar maestro Nozomu Wakai similarly wrote and played guitars on the double-kick steel-plated Irish warrior ode “Finn McCool”, while the six-string legend that is Steve Vai wrote “Dirty Like The City”, with Bonnet once again powerfully hitting notes that are beyond the business of most humans.

As fans will immediately hear, Alcatrazz is back doing what only they can do with Born Innocent, delivering quality hard rock with genuine storyteller lyrics, virtuoso performances, and an added layer of modern ‘heavy’ that underscores the melodic excellence. Don’t miss out on this piece of rock history.