VWMusic: During one of his off days on tour, Wolf Hoffmann recently joined VWMusic via phone to discuss, among other topics, Accept’s upcoming North American tour, Too Mean to Die, and the significance of some of the band’s classic albums. You can read the entire interview @ this location.

During your formative years, Wolf, who were some of your most prominent guitar influences and how did they shape your sound? 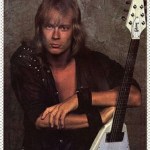 Well, one of the earliest influences was probably Ritchie Blackmore, both the lead guitar players from Judas Priest, and Angus Young from AC/DC was always an influence as well. So, out of those, I think I’ve sort of formed a little element from all of them. Uli Jon Roth has always been one of my heroes as well, of Strat players, basically, that I’ve really admired most. And then for songwriting and the bluesy aspects, I’ve always liked AC/DC as well. So, I guess, as I was growing up, I listened to all the bands of the ’70s, and we formed our own style out of it. My guitar playing was always kind of influenced by classical music. I don’t know why, but I like these sorts of classical touches in my guitar solos and in my songwriting.

On the song “Fast as a Shark” giving birth to thrash metal:

A lot of people have said it over the years, that “Fast as a Shark” is maybe the first thrash or speed metal song ever. That’s what most people say nowadays, then looking back, I guess it’s true. Of course, it makes me super proud. At the time, nobody could have known that; we just had a bit of fun. Like I said, we were starting to be pretty daring and not to give a shit anymore what people thought, and what the mainstream was. I mean, back in those days, it was all about radio.

It’s hard to imagine nowadays, but back then, it was all, “Oh, you can’t do this. You will never get played on the radio.” So, at that point, during Breaker and Restless and Wild, we said, “Fuck it. We’re just gonna do what we want. If the radio doesn’t play it, so be it. They won’t play it anyhow, no matter what we do, so let’s just have a little fun.” All of a sudden, songs like “Fast as a Shark” were born, because, hey, why not? We didn’t have anything to lose, we felt; we were young and wanted to just do whatever we could to shock the parents and play it as loud as we can.

On the song “Balls to the Wall”:

“Balls to the Wall” was a scary track because it came together in minutes, I have to say. The title was there, and I guess that came from Gaby back then. She had seen it in a magazine article, where somebody in Kerrang! Magazine called the band “balls to the wall.” And we had never heard that term, but it sounded cool, and it was provocative, so she basically said, “Hey, here’s a cool title: ‘Balls to the Wall.’” You know, I thought about it, and all of a sudden, I had this riff, and I had the melody and the chorus. It was just a few parts missing, but I brought it to the band, and within five minutes, it was done. It was scary.

On the album Metal Heart:

Yeah. We produced Balls to the Wall, and also Restless [and Wild] ourselves, and back in the 80s, there were all these legendary producers that made these bands famous. So, they said, “Well, if you guys would work with a top-notch producer, lots of doors would open up for you.” And that legendary producer was supposed to be Dieter Dierks, who had worked with the Scorpions. So, he worked on that album with us, and I have to give him credit, we did learn a lot from him, and we made a great album together. We really did. I think that is probably the reason why there are a lot of stylistic changes, and it became a little more polished or whatever. You know, songs like “Metal Heart,” “Midnight Mover,” and things like that, they certainly became a little more radio-friendly, if you want.