A Detailed Breakdown of Pantera’s “Cowboys from Hell” – MUST SEE!! 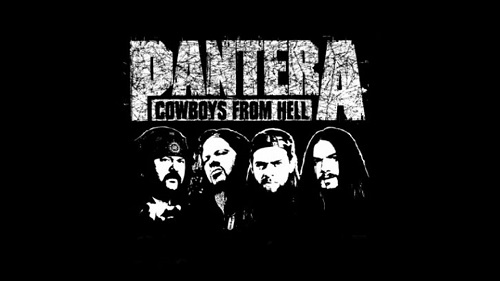 Ultimate Guitar just posted a “Complete Guide to Pantera’s ‘Cowboys From Hell'”. The breakdown is unbelievably cool, going into every detail from the guitar used, to effects, eq settings, amps used, amp settings, etc. – if you play guitar or are a Pantera-Head, or both, you really don’t want to miss this.

Here’s Pantera talking about the track, taken from a Metal Hammer interview:

Vinnie Paul (drums): “While we were pounding away, Megadeth called Dime and asked him to audition for them. Dave Mustaine actually offered him the job. They offered him health insurance, a Nike endorsement, and lots of money. But he came back to Texas and said, ‘Look, man, I would only join Megadeth if they wanted to hire you, and they already got a drummer. So let’s fuckin’ knuckle down and make this thing happen.’ I think that really made everyone focus. After we finished ‘Power Metal,’ we looked at ourselves and said, ‘You know what? These fancy clothes and all this crazy hair ain’t playing music for us, we are.’ So, we decided to drop the image and focus more on the music, and kick ass as much as possible.”

Phil Anselmo (lead vocals): “I showed them the fucking path, man. Dimebag came over to the first house I lived at in Texas in early ’88, and I said, ‘Look here. We’re gonna smoke a bowl and you’re gonna sit down and listen to a song.’ So we smoked, and then I put on the vinyl version of ‘At Dawn They Sleep’ from Slayer’s ‘Hell Awaits.’ Dime sat there and stared at the turntable, and by about the middle of the song, that big, curly head started to move a little, and by the end of the song, he’s like, ‘Damn, son. That’s badass!’ So right then and there, I had really broken some headway. ‘Cowboys From Hell’ is an anthemic statement that’s a bit cheesy. It’s the kind of thing I tried to avoid in the future. Shattered is the same way. It was like, ‘OK, nuclear war, great.’ It’s been done before. So I decided to take the realistic route – to sing about circumstance that other people can relate to. That, to me, was the way to get to people, instead of writing about dragons or serial killers.”

Rex Brown (bass, backing vocals): “That whooshing noise at the beginning was a loop we made for Dime to play over, and it was very repetitious and very fuckin’ annoying for a long while. He developed that whole riff over that. And that riff is a little form of in-the-box blues scaling. We were always down the street watching all these great blues guys in the studio, because Vinnie and Darrell’s dad was an engineer there. We’d sneak in the studio and sit way underneath the board and listen to these amazing players. And I think that’s where Dime got the bluesy groove.”

“Honestly, I go straight through my stack with just a couple of rack things. Live I just have my soundman out front. He does my delays – his choice of the delays, I don’t care, just put the fucking echo on there when it’s needed. We do have the delays all time out. He also does some Harmonizer stuff to double the runs on some of the songs off of ‘Cowboys From Hell’ so that it sounds like we have two guitars playing. Through my rack I have an MXR flanger/doubler. It’s not really an effect because it’s on all the time, and my tech and I work tight on that sound.”

Also be sure to read our old school full in bloom music Dimebag Bio.