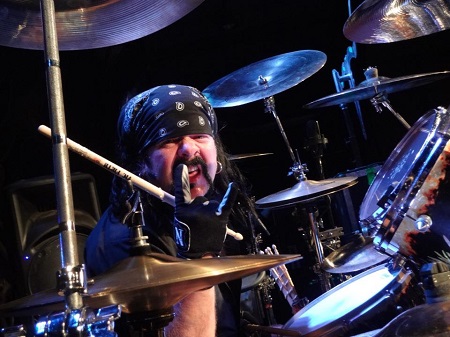 Sources close to Vinnie Paul’s family tell TMZ that the recently deceased drummer and Pantera co-founder will be buried in a custom KISS casket provided by Gene Simmons and Paul Stanley, as a gift.  Vinnie’s brother, “Dimebag” Darrell Abbott, was buried in the original prototype in 2004 after his untimely death. View the photos @ TMZ

As previously reported, Vinnie Paul was found dead in his Las Vegas home on June 22nd.  He was 54 years old.  A public memorial will be held on Sunday, July 1, 2018 at 3:33PM at the Bomb Factory in Dallas, Texas. More details can be found at this location.

The Rock Community is reeling from the loss of Vinnie Paul, a friend and inspiration to so many. If his family in fact would want him to be placed in a KISS casket we will make sure it happens. It is their decision and I will be proud for us to honor it. pic.twitter.com/g8QjkE9Yne

Rest in peace, Vinnie. Our prayers and good wishes go to his family, friends and fans. https://t.co/iXQ4Hum9lT

So sad to hear of the death of Vinnie Paul. Loved when Pantera did shows with us and in later years Vinnie was always front and center at all KISS shows. RIP and condolences to his family. https://t.co/DaQREBNVW7