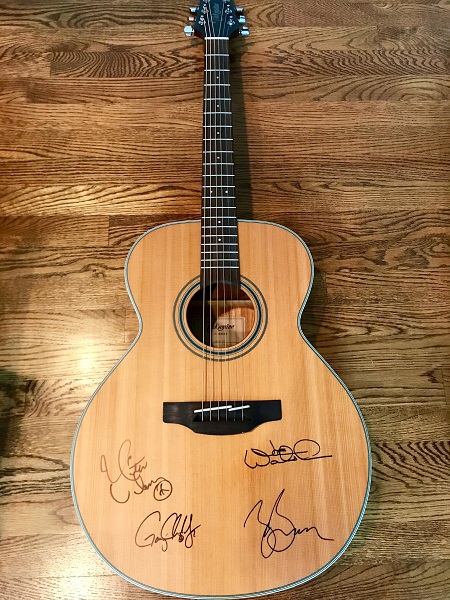 Here’s an opportunity to support our veterans by bidding to win a Takamine acoustic guitar (G430) signed by Joe Walsh and the rest of the performers at the inaugural VetsAid concert, including Zac Brown, Gary Clark Jr. & Keith Urban. The concert took place at the EagleBank Arena at GMU on September 20, 2017. All proceeds from the auction benefit VetsAid directly.

Providing support to organizations that care for the nation’s military wounded, ill and injured is deeply personal to Walsh, a Gold Star survivor whose father died while on active duty on Okinawa, Japan when Walsh was 20 months old. “It’s the least I could do for those who have served and continue to serve our country,” said Walsh. “We’re all in this together as Americans and seems to me lately that people are forgetting that.”

VetsAid is a non-profit organization that funds a variety of veterans-based charities nationwide, providing physical, mental and emotional care to soldiers and their families.