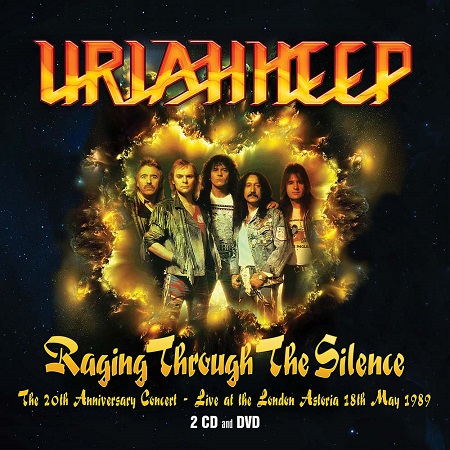 Uriah Heep just released a 2CD/1DVD package of their 1989 20th Anniversary show.  Titled Raging Through The Silence, the new remastered release was previously only available on VHS.

• Raging Through The Silence is housed in a six panel digi-pack with new custom artwork.

This concert is likely to be the only gap in many committed fans’ collections and gives their core fanbase the opportunity to complete the entire Heep discography. This release is the culmination of a long process to make sure all of the Uriah Heep back catalog is available in modern day formats and digitally.

The set also includes a bonus audio interview, recorded on the same day as the concert, which was previously only available on picture disc LP and CD for a very limited amount of time.

About the release, Uriah Heep’s Mick Box said: “This is a great meeting of two products, which were always closely linked together, and are now merged into one definitive set. This is the second release on Uriah Heep Records and a great reminder of our 30th Anniversary celebrations!”

DISC TWO
1. GYPSY
2. EASY LIVIN’
3. THAT’S THE WAY THAT IT IS
4. LOOK AT YOURSELF
BONUS TRACK
5. THE URIAH HEEP STORY INTERVIEW WITH CHRIS TETLEY