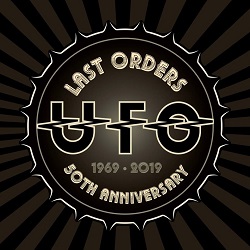 UFO (Official):  Chrysalis Records are set to release Phenomenon as a 3CD set and a 2LP 180gm Deluxe Edition’s on 11th October.

This new edition has been newly remastered by Andy Pearce from the original ¼” masters. The CD contains non-album album singles and b-sides, rough mixes and a concert from Atlanta in 1974. The vinyl version contains the remastered album and the Atlanta concert.

UFO are widely regarded as one of the UK’s best hard rock acts and this year (their final one) are celebrating their 50th year in existence with their final world tour.

Phenomenon was the band’s debut for Chrysalis and was a departure from the band’s previous Space Rock sound to a heavier rock style. This was also the debut for Michael Schenker who was going to have a major influence on the band in years to come.

This set has been newly remastered from the original analog production masters by Andy Pearce. Presented here in an 8-panel digipak with o-card with new sleeve notes by Michael Hann – it contains a disc of B-Sides and unreleased demo versions as well as a third disc of live material.