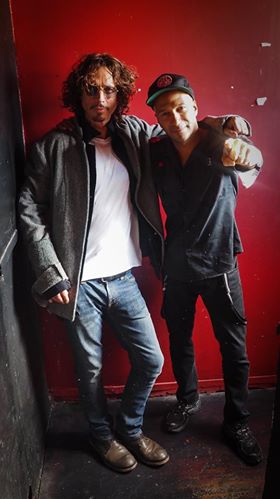 Guitarist Tom Morello (Rage Against the Machine, Audioslave, Prophets of Rage) penned another emotional tribute to his fallen friend Chris Cornell, who passed away on May 18. From 2001 to 2007, Morello played alongside Cornell in the band Audioslave.

On January 20, 2017, Audioslave reunited for their first show since disbanding at Prophets of Rage’s Anti-Inaugural Ball.  Cornell was later asked about the possibility of an Audioslave reunion, “It’s always a possibility. I mean, we’ve been talking about it for at least three or four years now,” Cornell replied. “We were talking about actually picking dates, and it just ended up not working out because everybody’s so busy. They have another band again, they all have separate bands that they do themselves, I have Soundgarden and a solo career that’s taking up a lot of time, and I just did Temple of the Dog. So, it’s really honestly as simple as we end up having a window of time where it’s comfortable for everybody and we want to do it, because I definitely feel like everybody’s up for it.”

In his song Sunshower, Chris wrote:

“I’d like to ask everyone present to consider making two pledges today in memory of the great Chris Cornell. First, to pledge to offer unconditional forever support to his family, especially his three beautiful children. Lily, Christopher, Toni, if you ever need to talk, need a hug, would like to hear stories about your dad, would like to TELL stories about your dad, need a guitar lesson, OR if you need to be reminded how very much your father loved you with all his heart, every one of us here today is there for you. Through Chris we are your extended family and lifelong resource of love and support.

“Second, I’d like to ask everyone here to make a pledge to each other. Look to your right, look to your left. If you ever find yourself in a moment of sadness and doubt, if you fall off the wagon, if you are depressed, if you’re in trouble, if you feel like you might slip off the tightrope of life, in that moment you can call the person sitting next to you right now, you can call me. For Chris’s sake let’s make a commitment to look after one another.

“And Chris, please say hello to some old friends for us. Say hi to Kurt, give my love to Layne, and I know that you will enjoy being roommates with Andrew Wood again. That’s one spectacular All Star grunge choir right there. I’d love a bootleg of those heavenly campfire jam sessions.

“Chris was many things but I think of him as a redeemer. As the driving force of Soundgarden he redeemed hard rock and metal. Unapologetically embracing badass riffs, he eschewed lyrics about dungeons or dragons and instead wrote deep dark soul searching poetry that opened the door for generations of artists who felt empowered to use their brains along with their musical brawn.

“Then Chris redeemed me and Timmy and Brad. It was Badmotorfinger that was one of the main inspirations for Rage Against The Machine and then years later we found ourselves in a band, Audioslave, with the man himself, opening a wonderful chapter of musical exploration and global rocking. Getting to watch firsthand Chris’ effortless conjuring of gorgeous and ferocious melody and his epic rock god-ness on a daily basis is one of the highlights of my life. We made music that I’m so proud of and then rocked Cuba, the first American band to do it, fulfilling a lifelong dream.

“And then Chris redeemed himself. Coming out of a period of addiction in the early 2000’s he turned his life around. I’d like to acknowledge and say thank you to someone here today, Tim Commerford. During this period it was Timmy who with an inspired, heroic act of love saved Chris Cornell’s life in 2001 and helped give us all sixteen more years of this beautiful man. But it was Chris himself, with the support and boundless love of Vicky, who built a wonderful, close knit, loving family, who made some of the best music of his career. He played beautiful solo concerts across the planet and after a twelve year break he reconnected with his Audioslave brothers on January 19th of this year. It was the last time I saw Chris. I felt so blessed to stand next to his feral rock fury and soaring vocals one last time. He was just SHINING. His last words to me were, “I had such a great time, let’s do that again. Whenever you guys want.”

“It is important today to honor Chris Cornell, the devoted husband and loving father, the warm friend and bandmate, but I’d also like to tip my hat to the darker corners of Chris’ soul because I believe that’s where his brilliance as an artist stemmed from. Chris once texted me in the middle of the night, “If you swallow the coin from the wishing well, your dreams will come true in heaven or hell.” The demons he wrestled with were real. But he harnessed those demons and rode them like a mother flippin’ Chariot Of Lightning strapped with Marshall Stacks to make some of the greatest rock n roll of all time. Loud Love. Just thinking about that awesome jam throws me into headbanging convulsions. Hands All Over. The beauty of Seasons. Try not to cry. Badmotorfinger top to bottom. It’s INSANE. You thought you were safe? Here comes Spoonman. Then Audioslave. He’s back! Cochise, Like A Stone, Show Me How To Live, I Am The Highway. You’re rocking, you’re crying, you can’t make up your damn mind. Chris is as melodic as the Beatles, he’s as heavy as Sabbath, he’s as haunting as Edgar Allen Poe.

“Thank you, Sunshower. Thank you for your love, your friendship, your peerless talent.

“The body is weak. The psyche is fragile. Things decay and are gone in time. Gardens turn gray. But, Chris, I know two things that are fucking invincible and will endure forever, your beautiful voice and our love for you.
TOM MORELLO”