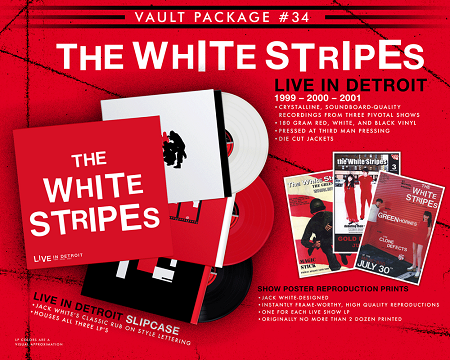 Available this October on Third Man Records via their Vault subscription service.

July 30th, 1999 found The White Stripes headlining the Magic Bag in fashionable Ferndale, a northern suburb of Detroit. Chosen as a venue mainly to placate the fans who wouldn’t venture to see The White Stripes in rough-and-tumble Detroit, the show would be their first performance after the release of their self-titled debut album. The cushy environs of the Magic Bag provided Jack with an in-house piano, making this the first time that he and Meg would ever incorporate the instrument live. Highlights include their first-ever stab at Bob Dylan’s “Love Sick,” an endearingly unique solo piano rendition of “You’ve Got Her in Your Pocket,” and a simplistic, embryonic rendition of “Dead Leaves and the Dirty Ground,” all of which provide for a tense performance, filled with equal parts rage and tenderness of which only The White Stripes were capable.

August 18th, 2000 had The White Stripes performing at Detroit’s venerable Magic Stick. Supported by near-and-dear friends (who’d later become bandmates and collaborators), the Greenhornes and Whirlwind Heat, the recording provides a window into the Stripes’ mindset that summer — just after their West Coast De Stijl headlining tour in June and still yet to experience the insanity of their opening slots for Sleater-Kinney in September. The only known live performance of Captain Beefheart’s “Ashtray Heart” (which they’d just recently laid to tape for eventual release in the Sub Pop Singles Club), a rare live outing for the deep cut “I’m Bound to Pack It Up,” and an electrifying set-ending “Let’s Shake Hands” leave the listener with the palpable sense that something amazing is about to happen for this band.

June 7th, 2001 marked The White Stripes final performance at the Gold Dollar in Detroit. As the first of three hometown headlining shows to support the release of White Blood Cells, the feeling in the air that night was one of excitement and anticipation. In what was arguably the most packed show in Gold Dollar history, Jack and Meg delivered beyond expectations and played their new, soon-to-be critically acclaimed record from front to back. Despite an attempt at tackling Get Behind Me Satan in Chicago in 2005, this would be the ONLY time The White Stripes would perform any of their albums in their entirety. In full command of their powers, The White Stripes proved to be both ascendant and transcendent on this night. This show was the triumphant culmination of the previous five years of gigging in Detroit.

Each LP in this set is pressed on 180-gram vinyl by Third Man Pressing in Detroit and housed in a custom die-cut sleeve that stylistically deconstructs the Stripes’ album released the year that corresponds to the live performance. Additionally, high quality reproduction prints of the Jack White-designed posters for each of these shows will be included. Originally limited to no more than two dozen copies printed (Kinko’s color copies were a buck a pop back then!), posted up at local Detroit record shops and watering holes and summarily torn down and thrown away, original copies of these highly-sought-after pieces have been known to command hundreds of dollars on the secondary market. The copies included here are gorgeous, instantly frame-worthy and much lighter on the pocketbook than the costly originals.

All of these components are lovingly housed in a sturdy slipcase utilizing the rub-on style lettering employed by Jack on a majority of his early flyer designs.