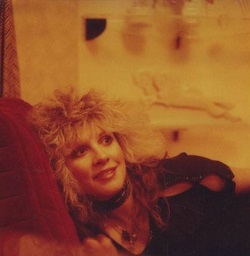 Stevie Nicks: In 1980 I was flying home from Phoenix Arizona and I was handed a menu that said, “The white wing dove sings a song that sounds like she’s singing ooh, ooh, ooh. She makes her home here in the great Saguaro cactus that provides shelter and protection for her…”

As you well know, I was very taken with that whole picture and went on to write “Edge of Seventeen.” But over the last 40 years I can honestly say, I have never heard a dove sing~ until now. Several days ago, outside my room, I started to hear the sound of a bird singing the same thing over and over. One little Ahhh~ and then three OOH’s~ over and over again. I thought it was an owl, but a friend said, “No, that’s a dove!” I started to cry. This dove had come here to watch over me.

So we filmed her singing her song and I am sending her out to you.

p.s. She has been here for days. I think she’s here for good.