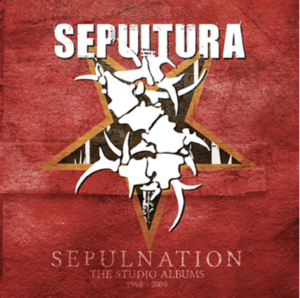 Despite being arguably Brazil’s biggest ever music export, when extreme metal legends Sepultura lost their original frontman and founder (alongside brother and drummer Iggor Cavalera) Max Cavalera in 1996 after their hugely influential ‘Roots’ album, many thought the band would not recover from his departure. However, in Cleveland, Ohio punk and hardcore scene veteran Derrick Green, Sepultura found a formidable, towering force that would lead the band with power and conviction through this new era of their career.

All five albums back on vinyl for the first time in over a decade.

Half speed cut and remastered.

‘Sepulnation – The Studio Albums 1998 – 2009’, released through BMG on October 22nd, celebrates the bands seconds phase, and this five-album boxset (across eight slabs of vinyl or five CDs) contains the albums; Against, Nation, Roorback, Dante XXI and A-Lex, all of which are half speed cut, remastered and back on 180g vinyl for the first time in a decade and also as a collector’s CD box.

In addition, the ‘Roorback’ album features the rare ‘Revolusongs’ EP, which is available for the first time digitally and saw the band celebrate their influences with covers of bands as musically broad as Devo, Exodus, U2 and Massive Attack! 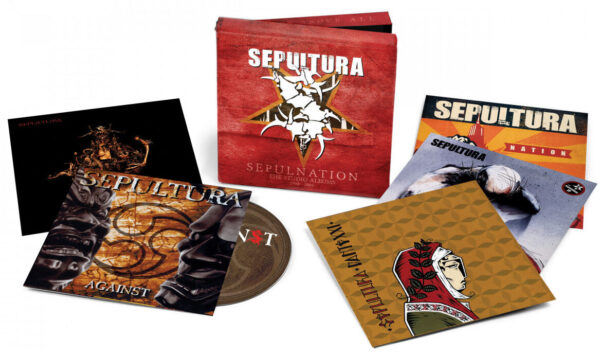 Any fans who feared that this new line-up of Sepultura would see the band taming their intense and heavy approach were not left disappointed when ‘Against’ came out of the traps in 1998. With the powerhouse that is Iggor Cavalera still on drums (he remained for four of the five albums), Andreas Kisser’s grinding guitars and bassist Paula Jr’s heavy bottom end powered behind Derrick Green’s guttural roar and Sepultura sounded heavier and more forceful than ever. This period would see the band continue to push their sound forward and challenge new sounds and styles, but they never lost sight of what was the core of the band. The righteous, rebellious nature remained with the 1998 album ‘Nation’ calling for ‘one nation, Sepulnation,’ – a rallying cry that stayed with the band throughout their long and challenging career.

‘Sepulnation – The Studio Albums 1998-2009’ brings the focus back on a period of the band that may have been missed by early supporters and shows that the fire continued to burn bright throughout.

“It’s an honor and privilege to be a part of Sepultura’s history,” states frontman Derrick Green.

“I’m proud of all the work we have done together and it only makes sense to have this box set format released for the fans to have the complete history of Sepultura. Long live the Sepulnation!”

SIDE B
F.O.E.
Reza
Unconscious
Kamaitachi
Drowned Out
Hatred Aside
T3rcermillennium

NATION
SIDE A
Sepulnation
Revolt
Border Wars
One Man Army

SIDE B
Vox Populi
The Ways of Faith
Uma Cura
Who Must Die?

SIDE C
Saga
Tribe to a Nation
Politricks
Human Cause

SIDE C
Messiah
Angel
Black Steel in the Hour of Chaos

A-LEX
SIDE A
A-Lex I
Moloko Mesto
Filthy Rot
We’ve Lost You!
What I Do!

SIDE B
A-Lex II
The Treatment
Metamorphosis
Sadistic Values 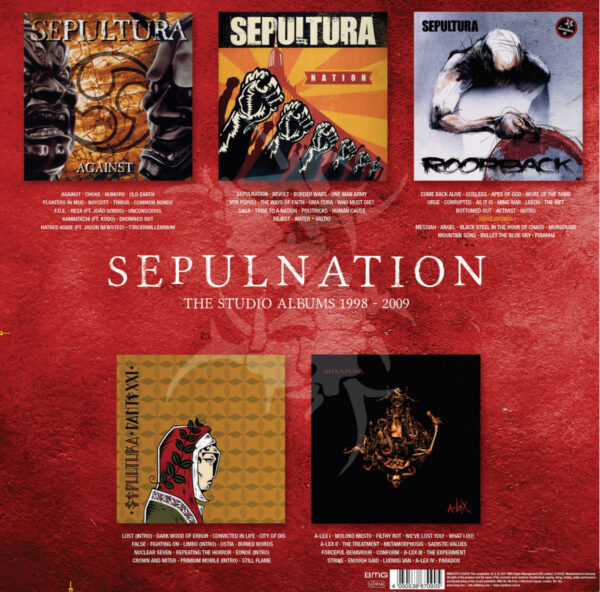