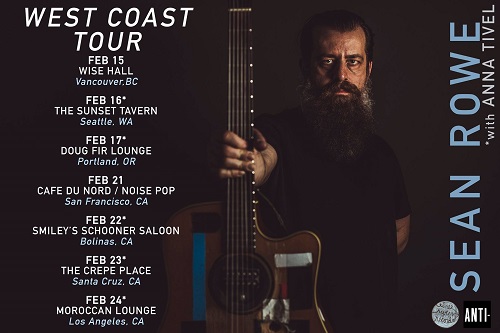 Sean Rowe and Anna Tivel just launched their 2018 West Coast tour on February 15th in Vancouver, BC at Wise Hall.  The 7-date trek will make stops in Seattle, San Francisco, Bolinas and Santa Cruz before wrapping up on February 24th in Los Angeles, CA at the Moroccan Lounge.

Rowe released his latest album, New Lore, on April 7, 2017.  “To me it’s reflective of the new path we’re carving out here with all of it’s uncertainties, major drawbacks and sweet in-betweens,” Rowe explained.  “I wanted the title to really reflect where I’m at right now. The record is very personal and there’s an element of risk in there like only good rock and roll has.  You know I’m here to give you everything I’ve got.  There’s really no other way for me.”

Rowe’s song “To Leave Something Behind” was featured in the 2016 movie, The Accountant, starring Ben Affleck.

About the tour, Tivel said: “Can’t wait to join up with one of my very favorite songwriters for some west coast shows this month! Sean Rowe is a dusky poet magician and his songs completely blow me away every time. Come join us in WA, OR, and CA!”