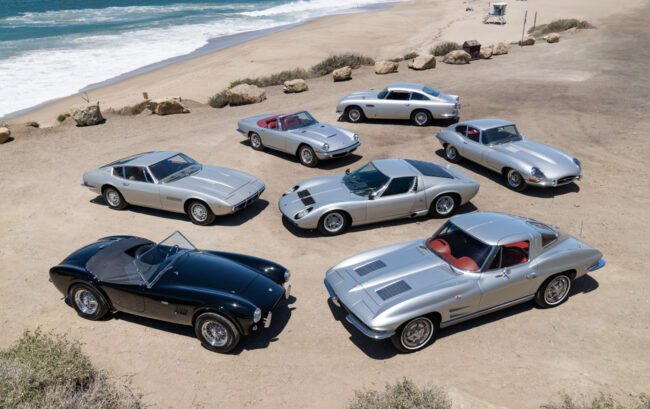 Legendary Rush Drummer Neil Peart Estate Car Collection to be Presented at Gooding & Company’s Pebble Beach Auctions
The iconic musician’s personal cars, which he dubbed the “Silver Surfers,” including a 1964 Aston Martin DB5, a Shelby Cobra 289, and a Lamborghini Miura P400 S, will be auctioned at Pebble Beach in August.

Gooding & Company, the official auction house of the Pebble Beach Concours d’Elegance®, is thrilled to announce its offering of the world-renowned rock drummer and lyricist Neil Peart’s collection of classic cars at its 17th annual Pebble Beach Auctions. The incredible opportunity to bid on these extraordinary classic cars, dubbed the “Silver Surfers” by the legendary musician, will take place at the company’s two-day sale on August 13 and 14, 2021.

Considered one of the greatest rock drummers of all time, the late Neil Peart had a highly distinguished career as the percussionist and lyricist for the groundbreaking band Rush, hailing from Toronto, Canada. Since its early days, Rush achieved immense global success and established a legacy as pioneers of sound, a feat no doubt made possible due to Peart’s musical genius. Throughout his legendary career spanning nearly five decades, Peart inspired countless numbers of fellow rock stars and aspiring young musicians alike. He and his bandmates were inducted into the Rock & Roll Hall of Fame in 2013 and received numerous other honors, including the Order of Canada, the country’s highest civilian honor.

Neil also had a formidable intellect which was conveyed in his lyrics, books, and numerous articles for a variety of publications. He was a prolific writer who constantly worked on his craft during his downtime from the band. His profound lyrics based on literature, science, philosophy, and his own life experiences dubbed him the name “The Professor” by the fans. He was revered as much for his lyrics as he was for his drumming, as certain recurring themes such as alienation, the angst of growing up, and the loneliness of being an outsider deeply resonated with a generation of young fans.

Peart’s love of cars was a lifelong passion, and his hunger for knowledge included learning everything there is to know about automobiles, inside and out. Classic cars were what he dreamed of owning for many years, and upon purchasing his first, the 1964 Aston Martin DB5, he exclaimed that he had dreamed of owning this car since he was a boy. Finally, in a position to purchase classic cars of this quality, he slowly and carefully acquired each car until his dream collection, the “Silver Surfers,” was complete. Sadly enough, after bravely battling brain cancer for three and a half years, Mr. Peart passed away on January 7, 2020. 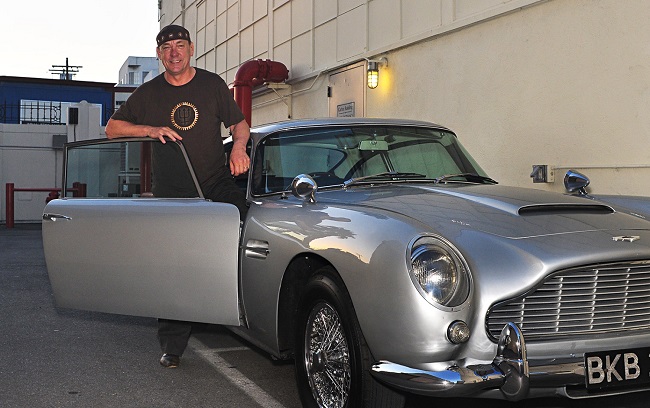 On the naming of his collection, Peart wrote:

“The title ‘Silver Surfers’ for my collection of cars occurred to me while driving the DB5 up and down the Pacific Ocean. Because it felt right to me, I guess – the idea that I was just one of the wave riders.

I had moved from Toronto to Los Angeles in 2000 (cherchez la femme), and in search of natural peace I often drove out that way and up into the Santa Monica Mountains. Out past Malibu to Ventura County, I’d weave along barren ridges of rock and vegetation, the ocean always on one big side. Some days would be misted by the marine layer, while other days the sun blared through a clear sky. The waves were slow and gentle, or churned out a powerful, rolling rhythm…

It was during one of these drives when out of nowhere, it just occurred to me that the color of the ocean had influenced the silver palette of the collection. What other color looks as good in a blue photo? Not black, not white – silver. And a fortunate risk for the framers’ art, too: silver frames.”

“We are beyond honored and humbled to be entrusted with the sale of Mr. Peart’s beloved collection of classic cars,” states Gooding & Company President and Founder, David Gooding. “Neil Peart touched the lives of so many through his groundbreaking career in music, including my own, and we are confident that his personal curation of classic cars will resonate with passionate collectors, finding them new homes with the same appreciation for them as the icon himself held.” 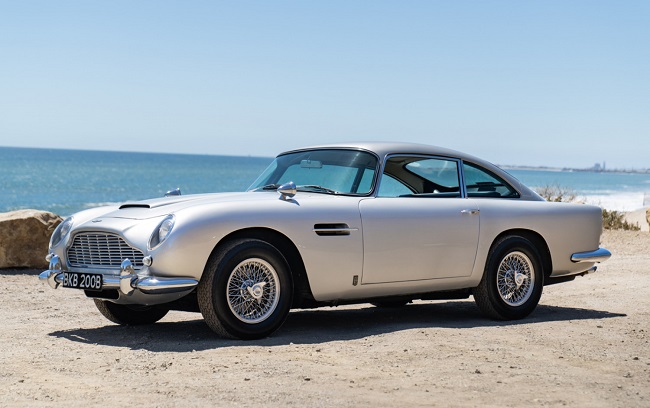 1964 Aston Martin DB5 (Estimate: $650,000 – $725,000)
Among the most recognizable and admired grand touring cars of all time is the Aston Martin DB5. Truly as sporty as it is elegant, the DB5 has come to embody the very definition of cool, forever linked to Sir Sean Connery’s portrayal of the ever-charming international spy, James Bond. Mr. Peart’s 1964 Aston Martin DB5, chassis DB5/1690/R, is one of just over 1,000 built, and was acquired by the consignor in 2009. It comes finished in the gorgeous colors of Silver Birch metallic over a navy blue leather interior, and also features a five-speed ZF gearbox and period-correct, alloy-rimmed Borrani wire wheels. 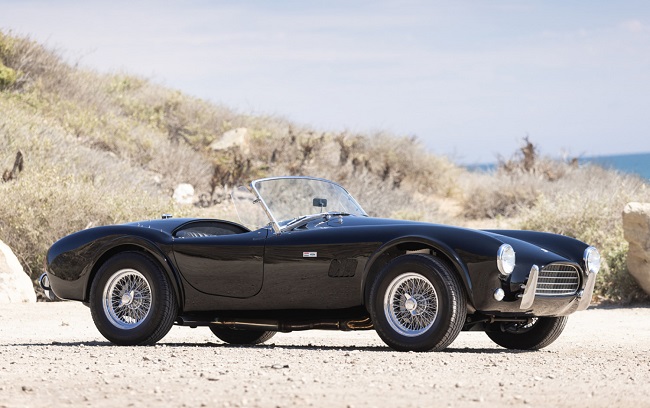 1964 Shelby Cobra 289 (Estimate: $900,000 – $1,000,000)
This magnificent 1964 Shelby Cobra 289, chassis CSX2234, was purchased by Mr. Peart in 2015 to serve as a centerpiece of his remarkable collection. It had received a comprehensive restoration in the mid-2000s and is stated to have been a particularly intact example prior to the work. Equipped from new with the desirable Ford 289 V-8 engine and rack-and-pinion steering, CSX2234 is finished in all black livery with chrome wire wheels and side exhaust. As one of the most famous, capable, and coveted sports cars ever built, Mr. Peart’s Cobra is the pride of his inventory of iconic sports cars. 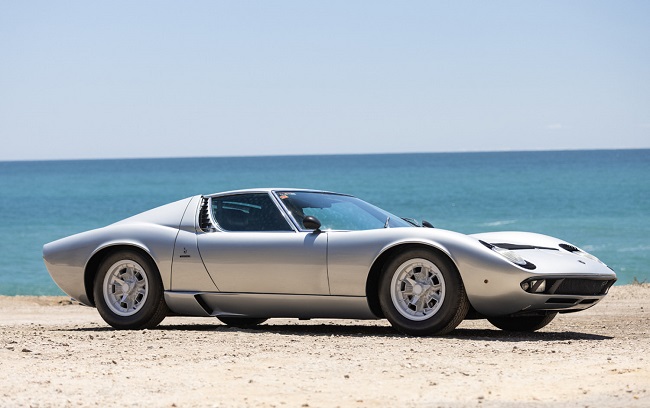 1970 Lamborghini Miura P400 S (Estimate: $1,200,000 – $1,500,000)
Often referred to as the world’s first true supercar, Ferruccio Lamborghini’s reality-defying Miura was the fastest production car of all time upon its release in 1966. Design house Gruppo Bertone’s Marcello Gandini designed the Miura’s stunning coachwork, concealing a mid-mounted transverse V-12 with an astonishingly low overall height of just over 41 inches. The Miura is understandably considered by some to be the most beautiful production car ever built. This particular Lamborghini Miura P400 S from Mr. Peart’s estate, chassis 4042, is finished entirely in his favored silver livery, and comes accented by a black interior. The impressive sports car is also fitted with air-conditioning and its boldly-styled Campagnolo cast alloy wheels. 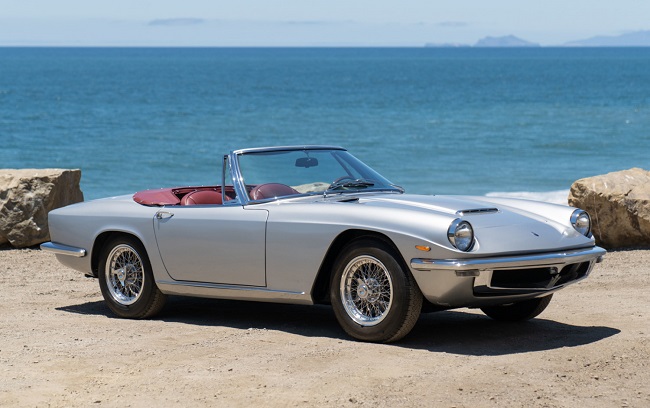 1965 Maserati Mistral Spider (Estimate: $575,000 – $650,000)
For the 1963 model year, Maserati updated their successful 3500 GT with a completely new model: the Mistral. Featuring sophisticated and modern lines designed by the talented Pietro Frua, a total of 953 Mistrals were produced by the marque over its eight-year production run, of which only a mere 125 were completed as Spider convertibles. Mr. Peart’s Maserati Mistral Spider presented here, chassis AM109/S*049*, was built in 1965 and was initially sold through famed exotic car importer Hoffman Motors in New York City. A comprehensive restoration was performed by the renowned Ken Lovejoy of Boulder Creek, California while the car was under Mr. Peart’s ownership. Presented in a brilliant silver metallic over an oxblood leather interior, this Mistral 3500 Spider appears in superb condition. 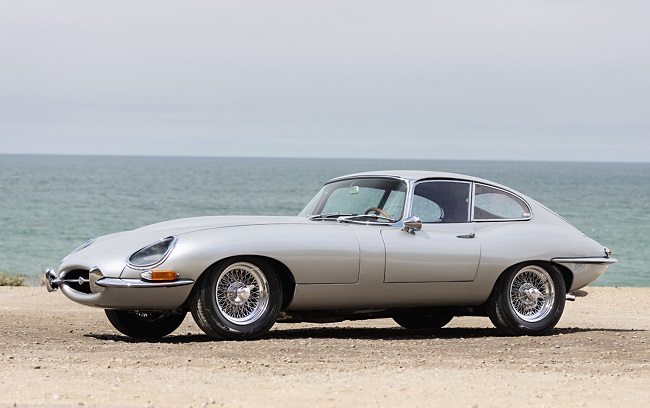 1964 Jaguar E-Type Series I 3.8-Litre Coupe (Estimate: $140,000 – $160,000)
This sleek two-place 1964 Jaguar E-Type Series I 3.8-Litre Coupe, chassis 890630, is finished in Opalescent Silver with a red leather interior. It has received significant, thoughtful upgrades, including a Tremec five-speed gearbox, lightweight flywheel, Wilwood disc brakes, and uprated suspension components. Surely one of the most beautifully styled roadgoing Jaguars of all time. 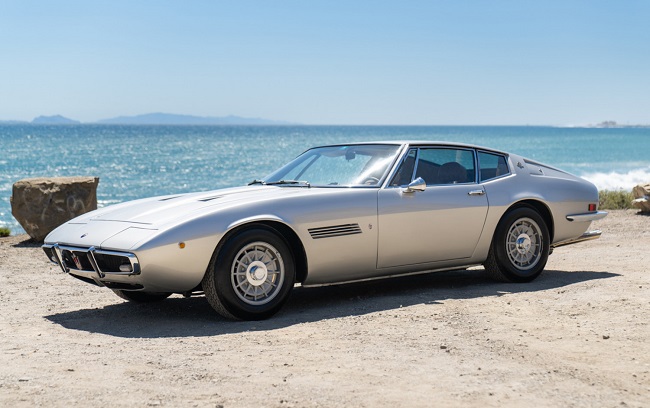 1973 Maserati Ghibli 4.9 SS Coupe (Estimate: $250,000 – $300,000)
The Ghibli was designed by accomplished automotive stylist Giorgetto Giugiaro and is considered among his very finest work, boasting angular lines, hidden headlights, a long hood, and a dramatically sloping roofline. One of just 425 produced, this 1973 Maserati Ghibli 4.9 SS Coupe, chassis AM 115 49 2428, is resplendent in its silver metallic paint over a tan leather interior. Mr. Peart’s special Ghibli features correct Campagnolo center-lock alloy wheels, and it was added to his impressive group of “Silver Surfers” upon its importation from Europe in 2013. 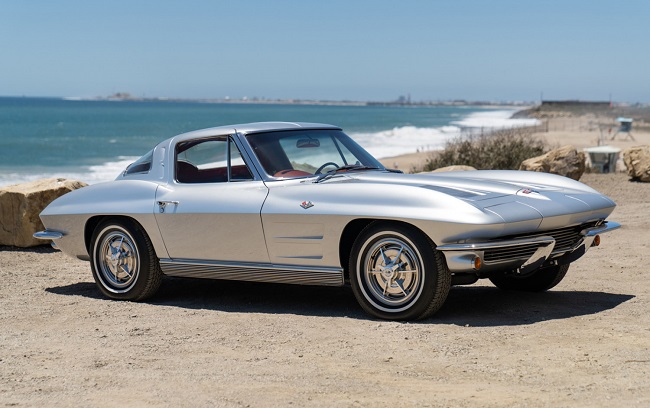 1963 Chevrolet Corvette Split-Window Coupe (Estimate: $150,000 – $180,000)
Mr. Peart’s Chevrolet Corvette Split-Window Coupe is a 327/340 hp coupe from 1963, the only model year to feature the iconic split rear window. Desirably equipped with a four-speed manual gearbox, chassis 30837S109652 is presented in silver with a red vinyl interior. The attractive and rare coupe received an extensive restoration prior to joining the Peart collection in 2011. The proportions, stance, and design details of the C2 Corvette coupe earn it a place among the greatest General Motors design achievements.