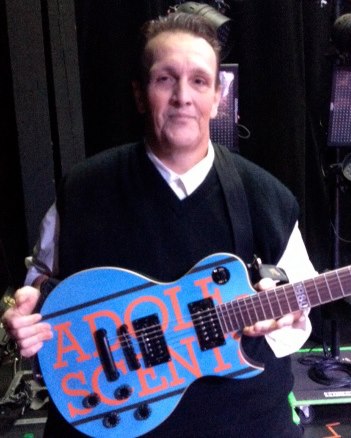 Steve Soto (August 23, 1963 – June 27, 2018) of The Adolescents & Agent Orange has died in his sleep. The Adolescents confirmed the news today saying, “With heavy heart I share the passing of Steve Soto, my friend and bandmate since 1979. I don’t know what to do. or to say. Goodbye my brother.” No word on the cause of death at this time. He was 54 years old.

In addition to his work with The Adolescents and Agent Orange, Soto has also worked with C.J. Ramone as a touring guitarist and performed on his 2017 album, American Beauty.

Mark McGrath: “Really sad to hear of the passing of Steve Soto, a huge part of my musical DNA, a beautiful soul with a beautiful voice…RIP ??”

Authority Zero: “We heard some troubling news last night that our friend and legendary bassist of The Adolescents passed away yesterday. He was a kind soul and is a legend with a legacy that goes leaps and bounds and may he Rest In Peace. We’ll see everyone today at Vans Warped Tour in Phoenix and this one’s for Steve! We don’t know what time we play so get there early! See you in the pit and let’s tear it DOWN for the last Warped AZ will ever see.”

Sick Of It All: “We are very sad to hear of the passing of Steve Soto of the Adolescents. Our paths have crossed numerous times over the years and he truly was one of the nicest, coolest, down to earth people we have ever met. We were lucky enough to share the stage with Steve and the Adolescents on last years Warp Tour. It was always fun and an honor to share the stage with them. Our hearts go out to his family, band mates and friends. R.I.P.”