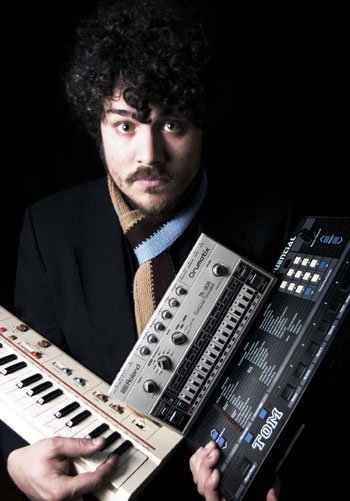 Singer-songwriter, multi-instrumentalist and producer Richard Swift has passed away. Last month, Swift started a GoFundMe campaign to help assist with rising medical bills after being hospitalized with a “serious medical condition.” He was 41 years old.

Swift was the founder, owner, and recording engineer of National Freedom, a recording studio located in Oregon. A former member of the indie rock bands The Shins and The Arcs, he has also produced such acts as Damien Jurado, David Bazan, Foxygen, Jessie Baylin, Nathaniel Rateliff, The Mynabirds, Wake Owl, Laetitia Sadier of Stereolab, Gardens & Villa, Cayucas, Guster and The Shins. In 2014, Swift joined The Black Keys as their touring bassist and backing singer.

Dan Auerbach: “Today the world lost one of the most talented musicians I know. He’s now with his mom and sister. I will miss you my friend.”

Nathan Followill: “Richard Swift was @JessieBaylin musical soul mate and could not have been a kinder soul. There will always be a special place in our hearts and memories for the one and only Walt Wolfman. RIP Swifty”

Leon Michels: “The Arcs was an excuse to hang out with each other and in the process we made some music that I’m most proud of. I feel extremely lucky to have know Swift. He was gifted at everything he did and inspired everyone he knew…I like to think he’s with Space Beard™️ right now making fun of us all. Love you $wift ❤️”

Cage the Elephant: “We lost a good friend and the world lost an immense talent today. Rest In Peace Richard”

Okkervil River: “Richard Swift was a singularly talented musician and producer; his illness and death reveal how fragile everything really is. Love and support to his friends & his family & all those he made beautiful music with.”

Dave Depper: “Richard Swift was the most talented person I’ve ever met, some impossible amalgamation of Harry Nilsson, Paul McCartney, and Levon Helm, beyond soulful on any instrument he picked up, and a writer of hilarious, heartbreaking, funky, psychedelic songs.”

Eric Slick: “RIP to my dear friend Richard Swift. I love you and I always will. My heart is broken, but i’ll never forget the times we spent together. You are a genius.”

Born Ruffians: “so so sad. RIP richard swift. fuck. we love you.”

James Vincent McMorrow: “So truly tragic and heartbreaking to hear about Richard Swift’s passing, incredibly inspired by him when I was starting out, inspired by him still. Rest in peace. X”

R.I.P. to Richard Swift. His records are incredible and his stretch of albums with Damien Jurado were a huge influences on the start of this band. He had an unbelievable ear for sound. What a huge loss to the world. pic.twitter.com/Py3Zh0fCaF