Phil Campbell, “I turned up to my (Motörhead) audition with three different types of amphetamine” 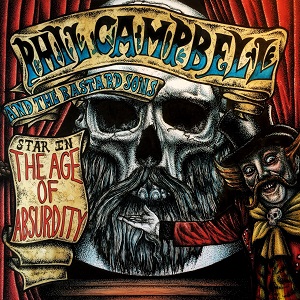 Campbell is currently on the road with his band, Phil Campbell and the Bastard Sons.  The group will release their debut full-length album, The Age Of Absurdity, this Friday, January 26th via Nuclear Blast.

WHICH CAME FIRST: THE IDEA TO START A NEW BAND AFTER MOTÖRHEAD, OR TO START A BAND SPECIFICALLY WITH YOUR SONS?

PHIL CAMPBELL:  Well, we started the band when my son Todd had a major birthday party about two or three years before Motörhead finished.  We booked a band, and we all got up and did a few songs with Neil, who we all knew.  It sounded good, so we booked some gigs. We were called Phil Campbell’s All-Starr band for a few years.  We were basically just doing cover songs, but it was really cool, like.

Sadly, when Lem (Lemmy Kilmister) passed away I didn’t know what to do.  For about four months I couldn’t even think straight, basically. Luckily I had my family and my band, so we had a go at writing some new material.  That’s when we changed the name of the band to Phil Campbell & the Bastard Sons.

IS IT TRUE YOU GOT LEMMY’S AUTOGRAPH AT A HAWKWIND GIG WHEN YOU WERE A KID?

CAMPBELL:  Yeah, when I was 12. I still have the program, which I cannot find at the moment, but I know it’s in my vaults. I went to see Hawkwind at Cardiff Capitol Theatre, which was about 12 miles away from where I live. It’s no longer there, sadly. It was my first time seeing Hawkwind, and they freaked the shit out of me. They had all these amazing lights and all this weird sci-fi shit. Being the little kid that I was, I just stayed out in the foyer for about 20 minutes afterwards hoping to see them. Lem was the only band member that came out, and he signed my program with his old style autograph, going all the way down the page on his picture. If somebody said to me that day that I’d be in a big band with this guy and win Grammies and go around the world, I’d have thought they were crazy. But it just proves that anything can happen.

DID YOU TELL LEMMY THAT STORY AFTER YOU’D JOINED MOTÖRHEAD?

CAMPBELL:  Yeah, but he didn’t remember it. He did remember when I turned up to my audition with three different types of amphetamine, though.

Previous: The War on Drugs on Jimmy Fallon – The Tonight Show
Next: Slayer, Lamb of God, Anthrax, Behemoth, Testament Tour 2018