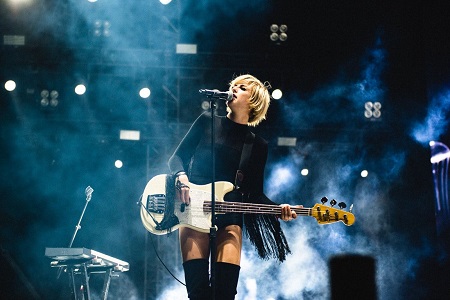 While Sarah Barthel was working on Phantogram’s latest album, Three, she tragically lost her sister to suicide. Barthel recently opened up to the American Foundation for Suicide Prevention about the experience. A few excerpts from the interview follow.

Sarah, thank you so much for making the time to chat with me! First of all, I just want to say I’m so sorry for your loss: I understand your sister took her life this past year. Had your sister talked about suicide before, or had she struggled with mental health challenges, as far as you know?

My sister Becky suffered from depression and anxiety her entire life. Everyday things that seemed normal to me – the first day of school, going to visit friends somewhere crowded – were always difficult for her. We didn’t think of depression and anxiety as being illnesses, and my parents dealt with her like a “troubled teenager,” always hoping she would grow out of it. She also resorted to alcohol – i.e. self-medication – to deal with everyday life situations. She had attempted suicide a couple of times when she was younger…but it was never anything we talked about.

Looking back, were there any warning signs that anything was wrong? Just to be clear, hindsight is always 20/20, and most people unfortunately aren’t familiar with the common warning signs. No one should ever feel responsible for a suicide death.

Nobody should ever feel responsible for a suicide death…but that’s easier said than done. That is the truth. I’m growing through this process with the help of therapy, but there isn’t a day that goes by that I don’t blame myself, and the other people in her life, too. It’s the heaviest feeling to ever feel. Suicide is so hard to understand.

There will always be a “what if” feeling when I think back to that day, the night before, and the years, weeks, days, and hours before it happened. I think the more this subject is talked about, the more people will understand the effect suicide has on everyone around the person who takes their life. But I know my sister was overwhelmed with pain. She suffered from depression her entire life. Her illness just overcame her.

Did you feel you got enough support, yourself, after hearing the news of your sister’s death? Losing someone to suicide can be very different than losing someone to a physical illness, because even people who care and want to provide support may not know what to say, and hold back from reaching out. There can also be family members who feel ashamed, and want to keep silent about the fact that it was suicide.

I’m blessed with incredible friends who helped me feel comfortable in talking about my sister’s death. Josh, my partner in Phantogram, who was also one of Becky’s closest friends, and is such an important person in my life, saved me. He’s my rock. Another person in my life who stepped up because she wanted to help me was Miley [Cyrus]. She’s a saint in so many ways. She helped me get to a place that made me feel like I could express myself and not feel judged.

It was hard for me to understand that I needed help at first in dealing with what happened. Since we don’t put enough emphasis on mental health in our culture, opening up about your feelings can make you feel like a burden, and it shouldn’t. It took me a long time to realize I wasn’t being a burden on other people, and that I needed to talk to save my own life. I would never take my own life, but the sadness I felt made me want to run away as far as I could.

After a few months of paralyzing feelings of grief, I realized I felt handicapped by all the feelings I was experiencing. So I decided to get professional help. My therapist saved my life. Miley saved my life. She taught me to open up and speak. This was a huge revelation. I had never felt comfortable talking about my feelings other than in my songs.

Phantogram released Three on October 7, 2016 via Republic Records. You can listen to their single, “You Don’t Get Me High Anymore,” at this location.