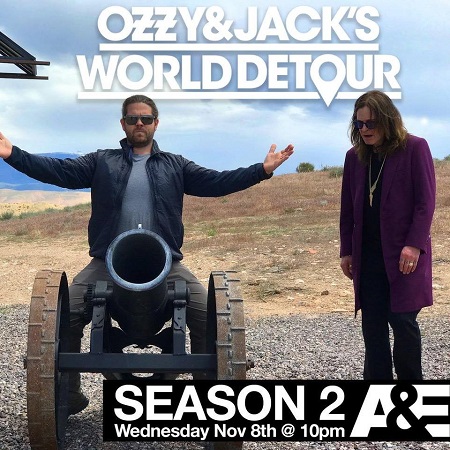 A&E Network hits the road with rock legend Ozzy Osbourne, and his adventure-loving son, Jack Osbourne, as they travel across America on the road trip of a lifetime in season two of “Ozzy & Jack’s World Detour.” Ten one-hour episodes will chronicle the cross-country journey beginning Wednesday, November 8 at 10PM ET/PT on A&E.

“I am so excited to be back for a second season because it means my dad didn’t kill me or cause too much destruction last season” said executive producer Jack Osbourne. “But you never know what will happen this time around!”

Growing up the son of a music legend, Jack missed his father who was often away from home on tour. Now they are making up for lost time with the ultimate father and son bonding experience, an extreme road trip in a vintage 1973 GMC camper—the same model that Ozzy’s band, Black Sabbath, used when they first began touring in America. This season, Ozzy and Jack travel thousands of miles across the country from Florida to Alaska and experience everything from unique local attractions to quintessential American pastimes. Whether they are deep sea fishing in Key West, experiencing a NASCAR race in Texas, camping with Jack’s daughter in Sedona, dogsledding in Alaska, or traveling with Sharon and the family to Hawaii, Ozzy and Jack approach every adventure with humor, heart, and rock n’ roll spirit.