Michael Schenker Takes Aim at Metallica & K.K. Downing: “People think they can walk all over me and rip me off and take the credit” – 2022

Blabbermouth: In a brand new interview with the “Rock Of Nations With Dave Kinchen & Shane McEachern” classic rock show, legendary German guitarist Michael Schenker was asked about ex-JUDAS PRIEST guitarist K.K. Downing’s claim that he “was the first guy to bring the Flying V [guitar] to heavy metal ever.” You can read the entire article @ this location. 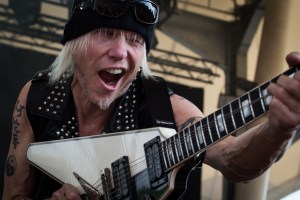 “Those people out there, they are so desperate for recognition and for being the first and taking all the bloody credit, like my brother (Rudolf Schenker). It is unbelievable. I have no expectation, and because of that people think they can walk all over me and rip me off and take the credit. I heard even METALLICA saying, the guitarists, that they invented the gallop [rhythm]. I had the gallop on [UFO’s] ‘Rock Bottom’ — well before [METALLICA did]. These people are crazy. They are so desperate for fame.”

“Then, when I went to the Whisky A Go Go when I had my first American tour, with my girlfriend, when I was 19 years old — somewhere ’74 or so, ’75 — we saw JUDAS PRIEST at the Whisky A Go Go. When they came onstage, I looked at my girlfriend and she looked at me. He was a double of me — he was an absolute double. He had the curly hair, he had the Flying V, he had my stage outfit as close as you can get it. It was unbelievable. And the fact is everybody knows that he’s a fan of Michael Schenker, so why would he lie about this in the first place? That’s just crazy.”

K.K. Downing: “I was the first guy to bring the Flying V to heavy metal”

Previous: Hear ‘N Aid Single “Stars” was Recorded at A&M Studios in Los Angeles 37 Years Ago Today – VIDEO
Next: Korn’s Jonathan Davis on Getting Bullied in High School: “It got to the point where I thought that maybe I was gay” – 2022