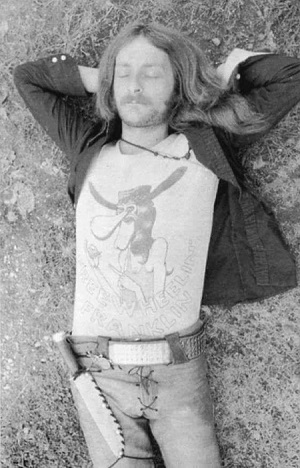 According to a social media post, former Hawkwind keyboardist/audio generator Michael ‘Dik Mik’ Davies has died. No cause of death has been given at this time.

In 1971, Davies was injured in a major traffic accident and was replaced by Del Dettmar in Hawkwind. He later returned to the fold that same year, but eventually left the group for good in 1973. In the official statement below, Hawkwind says it was “DikMik’s suggestion, and later persistence, that we got Lemmy (Kilmister) to join the band.”

“We are very sad to let you know that our old friend and band mate DikMik, (Michael Davies), passed away early this morning. He will be loved and remembered for his innovative contributions not only to Hawkwind, but to a whole musical genre of which he was an important pioneer…

“Dave Brock….”I remember when DikMik joined the band, he bought himself an audio generator from Tottenham Court Road, got himself a Watkins Copycat echo unit, a fold up card table, (complete with green baize), and became one of the innovators of electronic music!

“It was on DikMik’s suggestion, and later persistence, that we got Lemmy to join the band and you know the rest!