You may not have heard his name, but most likely you have seen his work. Michel Gondry is known for creating some of the most memorable music video imagery of the past 20 years. He is the creator of the dream sequences in the Foo Fighters’ “Everlong” video, the LEGO stop motion video for the White Stripes’ “Fell in Love With a Girl,” Cibo Matto in “Sugar Water,” Daft Punk’s “Around the World,” as well as, several pioneering clips for Bjork.

Now the French director is taking on album art, creating an amazing promo video for Pandora’s #SoundsLikeYou campaign.  In the clip above,  a female runner races through 3D recreations of some of music’s most recognizable album covers, including the Doors’ Morrison Hotel, Metallica’s Master of Puppets, Devo’s Freedom of Choice, Nirvana’s Nevermind, Joy Division’s Unknown Pleasures, David Bowie’s Blackstar, Drake’s Nothing Was the Same, and the Weeknd’s Starboy. 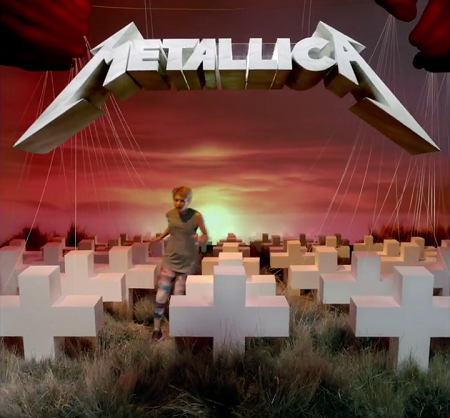 “For me, it’s a real time-travel experience, and I wish it could last for days and days,” Gondry recently told Yahoo Music. “I was invited by Pandora to create a journey through the most iconic music albums from both the past and the present. Music is an immersive and emotional experience. Each album cover represents a world of memories and feelings that you have experienced while listening to the music. It seemed natural to me that the viewer should experience this immersion. That’s why I decided to recreate each cover like an experiential landscape — a world in itself. All the album covers were sets built together in a big studio so the camera just had to follow our runner through them.”