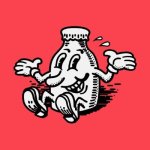 Creem: “It’s going to be totally asylum 1930s, the pioneering of experimenting with human beings, medically, and all this sick shit like that.” A very rare interview w King Diamond of Mercyful Fate before their first US show in 23 years at Psycho Las Vegas! You can read the entire interview @ this location. 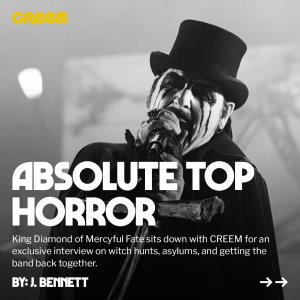 Are we getting a new Mercyful Fate album next year?

When it comes, I don’t know, but definitely a new album. There’s another song we’re working on. I won’t say the title right now, but it’s really cool. It’s not nine minutes long like “The Jackal of Salzburg”. We could play it, but we are not doing that. It’s very theatrical. And I have lots of lyrics and lyric pieces done for quite a few other songs. Hank has sent me stuff, and it’s just like the old days. He says, “Use whatever you want. Put your touch on it, and then it’s Mercyful Fate.” Of course, his touch is important, too—together it’s Mercyful Fate.

What’s the status of the new King Diamond album?

The lyrical concept is about a mental institute, isn’t it?

It’s going to be totally asylum 1930s, the pioneering of experimenting with human beings, medically, and all this sick shit like that. We want to do some stuff onstage… I don’t want to say it now because it has to be a surprise. But it’s going to be very horror. When this is done with Mercy here, we will focus 150% on King Diamond, getting it all done and recorded.

What can fans expect from Mercyful Fate at Psycho Las Vegas?

This is the first time in 23 years that we are playing in the U.S. The set is being built right now. It’s the first time that you will see Mercyful Fate with an A-class production. And it’s all old songs except for the new one, “The Jackal Of Salzburg.” So, the look, the feel, the mood, is very unique. Lars [Ulrich], James [Hetfield] and Rob [Trujillo] from Metallica were at the last European show, and it was so gratifying to see them headbanging at the side of the stage. Lars sent me a message the next day saying, “It was so cool yesterday. Me and James felt 20 again.” Stuff like that means a lot to me.

But wait ’til you see the production. It’s white; it looks like marble. And it has the feeling of this sacrificial chapel. There’s a two-meter-tall altar, there’s a three-and-a-half-meter tall cross hanging above the altar. They’re still building the stuff in Poland, so I hope they get it finished to fly the pieces over that need to be fused together in Las Vegas. But the set is all songs from the mini-LP, Melissa, Don’t Break The Oath and then the new song. And I guarantee you, I sound better today than ever in my career. If you’re coming to the show, you won’t forget it.