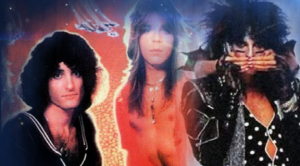 The excerpt was taken from a full in bloom interview with Quiet Riot vocalist Kevin Dubrow. The interview was conducted just prior to Kevin’s death. This excerpt is also available via YouTube clip, which can be viewed below.

full in bloom: What was the (L.A.) music scene like back then, like before you made it?

Kevin Dubrow: Terrible. Van Halen got signed a couple of years prior and we thought we’d be the next ones, but we weren’t. We were the only hard rock band, pretty much, in town at that time. Motley (Crue) had just got started, so they were pretty much coming up in the clubs. We had been out there as Quiet Riot for a number of years. A lot of bands like The Knack.

full in bloom: Do you remember London at all?

Kevin: I remember that they were just awful. Oh, God. I mean, nice guy, Lizzie Grey, but the worst guitar sound of all time. I remember he could peel wallpaper; it was so treble-y and bad. He’s a really nice guy, and he’s still hanging out there. God bless him. I don’t know how he earns a living after all these years. The drummer Dana (Rage), I ran into him about two years ago.

I knew all the guys. I mean, they had Nigel Benjamin from Mott, and I was a big fan of Mott. They were never very good. Nikki (Sixx) stumbled onto a real good thing with Motley Crue image-wise because Motley Crue started in the image of London, which was very pop, REALLY pop, & then Nikki realized that wasn’t going to be the thing that was going to crack it for them.

full in bloom: Well, I think he even took stuff from….

Kevin: Absolutely, but he took a darker, evil, hard rock direction as opposed to the real light pop thing of London because it was real pop. It was trying to be a mixture between the Raspberries and the New York Dolls and, musically, really light.

full in bloom: They were, other than you guys, the other hard rock band on the scene?

Kevin: Well, Quiet Riot predated London by years. London was around the same time as Dubrow. But remember that Nikki auditioned for Quiet Riot when Kelly (Garni) left in ’77.

Kevin: No. We predated these bands by at least four or five years; long years, let me tell you.

full in bloom: Was Nikki any good at that time?

full in bloom: He was terrible?

full in bloom: But he actually sat down and jammed with you guys?

You can listen to the original audio from the interview via the YouTube clip below.