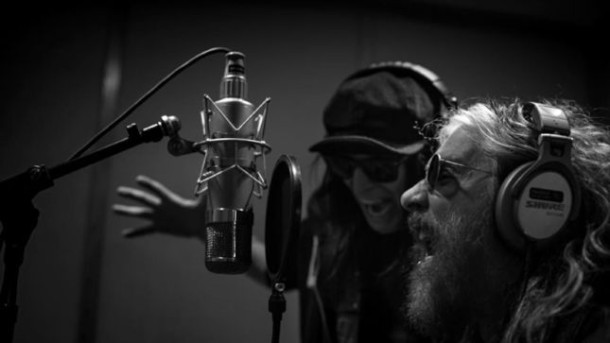 An excerpt from the full in bloom interview with John Corabi has been embedded below. The ex-Motley Crue frontman says Mick is working with a singer-songwriter and “wants to do something a little heavier.”

Two clips of the most recent Corabi and Mars collaboration (“Gimme Blood” & “Shake the Cage”) have also been embedded below.

full in bloom: Immediately following Motley Crue’s final tour, you went into the studio with Mick Mars to lay down some vocals on his highly anticipated solo album. I know you got very busy and had to bow out, but has there been any movement on that project?

John Corabi: No, you know Mick called me and asked me if I would sing a couple of tracks, which I did. Then we talked about doing more together, but then it came down to my schedule between the Dead Daisies and my solo career and in trying to squeeze in time for Mick…in all fairness, I didn’t want to half-ass anything with him. If I was going to do something with him, I wanted to give him 100% or nothing, and he totally understood that. For Mick, this record he is going to do, it’s a very important record because he’s the only guy in the original Motley, and some of the replacement guys, that has not done a record outside of the Motley camp.

full in bloom: Is he still working on the record?

John Corabi: Yeah. I actually know one of the guys he is working with in Nashville. I don’t want to say any names because that’s Mick’s thing, so I’ll let Mick talk about it. But I know a singer-songwriter that he’s been working with who is stupidly talented and I can’t wait to hear what these guys are coming up with. It going to be pretty awesome.

full in bloom: I thought he and Tom Keifer might be a good match.

John Corabi: I personally thought Mick should do something more on the bluesy side, but, on the other hand, and maybe I’m not understanding him properly, but Mick wants to do something heavier. I don’t know where it’s going to be or what it’s going to sound like, but I know the singer-songwriter that he’s working with and I can’t wait to hear it. I’m just as excited as all the other Motley fans out there. I can’t wait to hear it.