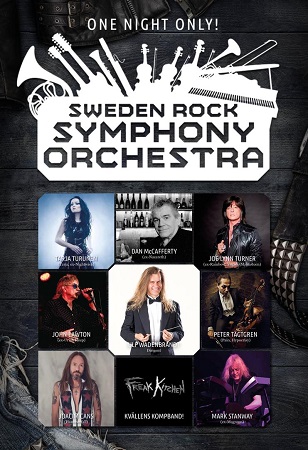 Just confirmed: The Sweden Rock Symphony Orchestra, a grand symphony orchestra featuring 48 musicians and a choir, will be performing alongside Swedish prog rock / metal band Freak Kitchen, plus six guest star vocalists for one night only at the 2017 Sweden Rock Festival.

The Sweden Rock Symphony Orchestra, which usually goes under the moniker Sweden Symphony Orchestra, is one of the premier orchestras in Sweden. Founded by conductor Ulf Wadenbrandt, the orchestra has played all the major concert venues in Sweden, such as Berwaldhallen and Göteborgs Konserthus, as well as performing on national TV.

Debuting on June 6, 1992, the Sweden Rock Festival is an annual rock / metal festival held in Sölvesborg, Sweden. The 2017 festival will take place on June 7-10 and will include performances by Aerosmith, the Scorpions, In Flames, Kansas, Clutch, Ratt, Warlock, Primus, Venom, Ministry and several others. More info at this location.