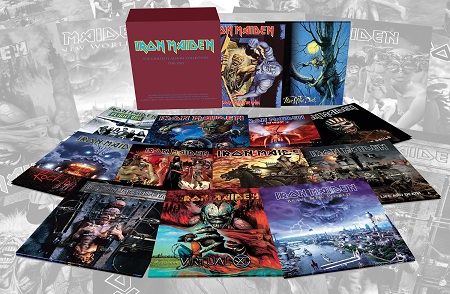 Parlophone Records will follow 2014’s reissue of the first eight IRON MAIDEN albums, which spanned the 1980s, with twelve brand new pressings of albums from the period 1990-2015 in heavyweight 180g black vinyl.

Unlike the 1980’s reissues which were cut from the original analogue master tapes, the audio on these releases has been cut from the high-resolution remasters of 2015 when the Maiden catalog was digitally upgraded. They will be packaged in identical artwork to the initial vinyl releases.

The records will be released chronologically across a three month period:

May 19th: No Prayer For The Dying / Fear Of The Dark / The X Factor / Virtual XI

As a bonus, the first two albums (No Prayer For The Dying & Fear Of The Dark) will also be made available in an exclusive Collector’s Box sized to house all 12 albums with additional space for fans to insert the latest Maiden studio album The Book Of Souls, which was released on triple black vinyl in 2015. The Collector’s Box will be a strictly limited edition and available while stocks last.

These high quality, black vinyls comprised of eight studio albums together with a specially selected choice of four live recordings from this period, completes the IRON MAIDEN album reissues series and offers Maiden fans the opportunity to own the band’s entire studio album legacy on vinyl simultaneously for the very first time.

Previous: Mike Shipley on the Making of Def Leppard’s Pyromania & Hysteria
Next: VIDEO: Footage of Al Di Meola in the Studio Recording His New Album