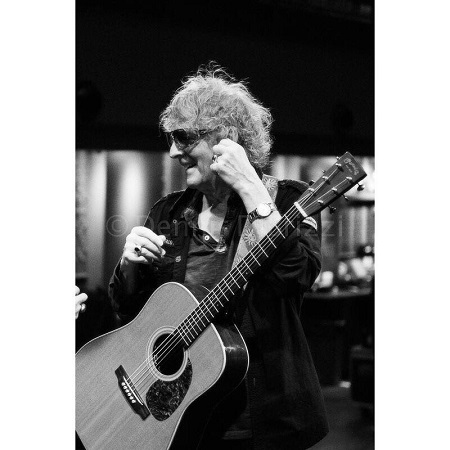 Rehearsals complete. On to Milwaukee.”

This April, Mott The Hoople ’74 will tour the U.S. for the first time in 45 years. The tour, featuring core ‘74 members Ian Hunter, Ariel Bender and Morgan Fisher, celebrates the 45th anniversary of their famous 1974 U.S. tour, as well as the original release of The Hoople and Live, the final albums of the classic Mott The Hoople era. The eight-date run of theatre performances begins April 1 and concludes at the Beacon Theatre in New York City on April 10. Tickets go on sale this Friday, January 25.

In 1974, the last time Mott The Hoople performed in the U.S., they played theatres and arenas across the country in support of The Hoople, an album that features Mott classics like “The Golden Age of Rock n’ Roll” and “Roll Away The Stone,” both Top 20 hits in the UK. The groundbreaking band, with Top 15 UK singles “All the Way From Memphis” and “Honaloochie Boogie” and whose big US hit was the Bowie-penned “All the Young Dudes,” became the first rock group to play on Broadway in NYC, with a sold-out week at Uris Theatre. They recorded a set at the Uris, too, which yielded their Live album. At the height of their popularity, they brought along their protégés, Queen, to make their U.S. debut. This was also the year that front man Ian Hunter published ‘Diary of a Rock ‘n’ Roll Star,’ his 1974 tour memoir that Q Magazine has called, “the greatest music book ever written.”

In this pivotal year, Mott The Hoople established themselves as one of rock’s most beloved bands. Brian May and Roger Taylor of Queen both credit them and the ’74 tour for helping inspire Queen’s theatrical stage show. A young Aerosmith earned national exposure when they opened a handful of shows on the ’74 tour as well. The Clash, Cheap Trick, Kiss, Def Leppard, Primal Scream and more have championed Mott’s genre-bending transformation of rock. Writing for Creem Magazine, Lester Bangs called another of the group’s albums, 1973’s Mott, “an unqualified rock ‘n’ roll masterpiece,” and Rolling Stone around this time called them “the most productive band of the last three years, with only the Rolling Stones…in the same category.”

Mott The Hoople recently reunited in Summer 2018 to headline the Ramblin’ Man Fair in the U.K. In its five-star review of their set, Classic Rock magazine cited “Sweet Jane,” “Honaloochie Boogie” and their epic encore of “Saturday Gigs” as monumental moments: “Mott the Hoople are simply brilliant. Their energy, passion and obvious skills are a joy to behold…a band at the top of their game.”