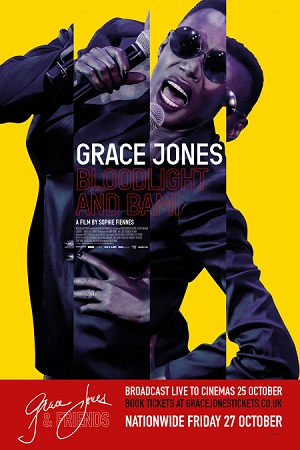 Join Grace Jones and Friends Live at BFI IMAX for a thrilling and enlightening evening. Discussing her life and work with some of her closest collaborators from the worlds of music, fashion, art and film, following an exclusive preview of Sophie Fiennes’ highly anticipated new film Grace Jones: Bloodlight and Bami.

The event will be  broadcast live to cinemas on October 25, 2017.
Find your closest cinema and book tickets at this location.

Grace Jones: Bloodlight and Bami takes the viewer on an intimate and electrifying journey that moves between four cinematic layers – performance, family, artist and gypsy – to explore the fascinating world of this pop cultural phenomenon. Here we see her behind the mask as a daughter, mother, sister and grandmother, alongside taking to the stage for a specially commissioned performance, with legendary hits including “Pull Up to the Bumper” and “Slave to the Rhythm” showcased in full. Larger than life, bordering on cartoon, wild, scary and androgynous – Grace Jones plays all these parts.