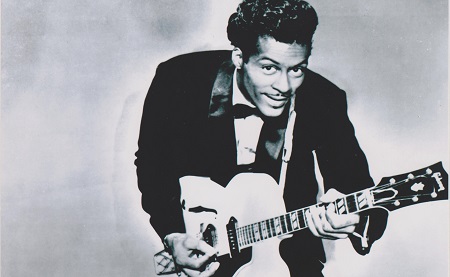 Farewell to one of the true rock n’ roll pioneers:

Responders were called out to the property at approximately 12:40 p.m. and found a man, later identified as Berry, unresponsive.

“St. Charles County police responded to a medical emergency on Buckner Road at approximately 12:40 p.m. today (Saturday, March 18). Inside the home, first responders observed an unresponsive man and immediately administered lifesaving techniques. Unfortunately, the 90-year-old man could not be revived and was pronounced deceased at 1:26 p.m.

“The family requests privacy during this time of bereavement.” 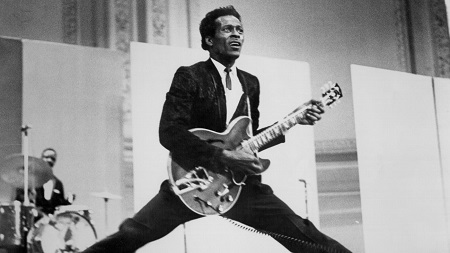 An American guitarist, singer/songwriter and one of the pioneers of rock and roll music. Songs like “Maybellene” (1955), “Roll Over Beethoven” (1956), “Rock and Roll Music” (1957) and “Johnny B. Goode” (1958), defined Berry’s career. His distinctive style, his flashy guitar solos and supreme showmanship will always be a reminder that Chuck Berry was one of the true archetypes of Rock n’ Roll.

First recording session:
“I came up to Chicago in 1955 to get myself a recording contract, and Chess signed me almost immediately. At my first session I cut four numbers, ‘Wee Wee Hours,’ ‘Maybellene,’ ‘Thirty Days’ and ‘Together,’ so I guess I got three hits out of my first recording” (1964)

Songwriting process:
“I concentrate on the lyrics usually, and then I work out the song on my guitar when I have the lyrics on paper. Then I tape it to get an idea of the overall sound, after which I record it. Most of my songs come from either personal experience or other people’s experiences or from ideas I get from watching people. I would say that I aim specifically to entertain and make people happy with my music, which is why I try to put as much humor into my lyrics as possible” (1964)

Influences, and on influencing The Beatles:
“Of course I’ve been influenced, by everyone from Bing Crosby to the Beatles. I don’t let my music be consciously affected by anything. What do I think of the Beatles versions of two of my songs? Very nice. But they recorded them two, three years ago now. In fact it’s only now that I’m beginning to feel the benefits of them – those songs ‘Roll Over Beethoven’ and ‘Rock And Roll Music’ are now on an upward trend” (1967)

‘Maybellene’:
“Oh, there was a very popular country song called ‘Ida Red’ which had the same theme as ‘Maybellene.’ In fact when I went to the session, I wanted to sing ‘Ida Red’ but the record company wanted me to do a new song, so I wrote ‘Maybellene’” (1973)

‘Roll Over Beethoven’:
“Yes, I wrote that at home. My sister did a lot of classics, Strauss, all those names. And when I was hanging around I tried to read the sheet music she left on the piano, which was far in advance of my one-finger chromatic scale technique. So I wrote a song about moving all that stuff out of the way” (1973)

“I wanted to play blues. But I wasn’t blue enough. I wasn’t like Muddy Waters, people who really had it hard. In our house, we had food on the table. We were doing well compared to many. So I concentrated on this fun and frolic, these novelties. I wrote about cars because half the people had cars, or wanted them. I wrote about love, because everyone wants that” (2001)

I am so sad to hear of Chuck Berry’s passing. I want to thank him for all the inspirational music he gave to us. 1/3 pic.twitter.com/9zQbH5bo9V

The Rolling Stones are deeply saddened to hear of the passing of Chuck Berry. He was a true pioneer of rock’n’roll & a massive influence. pic.twitter.com/RT4NZH3KeQ

Chuck Berry was not only a brilliant guitarist, singer and performer, but most importantly, he was a master craftsman as a songwriter. 2/3

I am so sad to hear about Chuck Berry passing – a big inspiration! He will be missed by everyone who loves Rock ‘n Roll. Love & Mercy

Rock and Roll grieves tonight as our hero Chuck Berry steps into the next world. We salute you… https://t.co/8ySfV7Jkkb

A true pioneer, Chuck had tremendous influence on my work and could not have been a nicer guy. 1 of the all time greats. RIP #ChuckBerry. pic.twitter.com/5sXSKr8Sqf