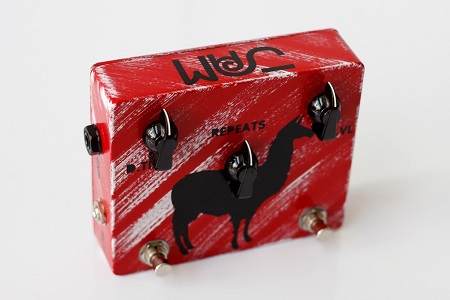 The Delay Llama series is fundamentally designed with one thing in mind: Tape-Echo.

This is the Delay Llama from Jam Pedals. Analog delay with a psychedelic hold switch that can get crazy! #guitar #gear pic.twitter.com/VlqrSaUmuz

A fully analog, true-bypass, delay pedal with a maximum delay time of 600ms. It features BBD analog chips, faithful reproductions of the Panasonic MN3205 that give your repeats a great analog tone as well as that elusive Tape-Echo response we all love.

The Delay Llama+ features a blue rectangular internal trimmer, to help you adjust the amount of maximum repeats.

With the use of the extra HOLD switch and expression pedal, you can turn the Delay Llama into a psychedelic sound generator.

HOLD foot-switch: While holding the switch down, your repeats turn into an infinite oscillation loop ! Take your foot off the switch and the number of the repeats is right back to where the repeats-knob is set at.

The Delay Llama+ can also be used with bass guitars.

“The Delay Llama+ is just great! So cool to actually have a “real” analog delay where it does some more unexpected, out of control things…This is cool !” Bill Frisell

“You’ve created a very special line of products here having only sampled a few of them I can say they are made with integrity and deliver the full sonic spectrum. The Delay Llama+ with it’s infinite hold gives you just that, limitless possibilities and when paired with the the expression pedal you can really create some atmospheric sonics. Keep doing what you are doing! Daniel Lanois.

“The quality of the delays in Delay Llama+ are beatiful and warm !” John Abercrombie

Previous: KGON in Portland: Interview with KISS Guitarist Tommy Thayer on Monday
Next: FREE Download: Public Enemy’s New Album ‘Nothing Is Quick In The Desert’, Listen!