David Chastain on ‘Mystery of Illusion’ Album: “We received a demo tape from a then unknown teenager named Fred Coury” – 2022 – Reissued on CD/VINYL/LP 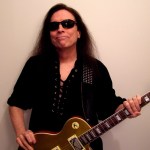 David T. Chastain: When I was putting together CHASTAIN with Mike Varney, along with Leather Leone and Mike Skimmerhorn, the final piece of the puzzle was the drummer. We received a demo tape from a then unknown teenager named Fred Coury and was floored with his chops and energy. He was immediately asked to join the band and play on “Mystery of Illusion” that has just been reissued on Cd and Vinyl on Jolly Roger Records. We then all met out in the San Francisco area for rehearsals and the recording of the album. Fred added a lot of “younger” influences to the sound of the band. I recently found this in my never-ending quest to reduce the archives. Both Fred and I had completely forgotten about it. Obviously, Fred went on to do great things in the music world and still continues to create new music. I have been lucky in having amazing drummers on all of the Chastain albums: Fred, Ken Mary, John Luke Hebert, Dennis Lesh, Larry Howe & Stian Kristoffersen.