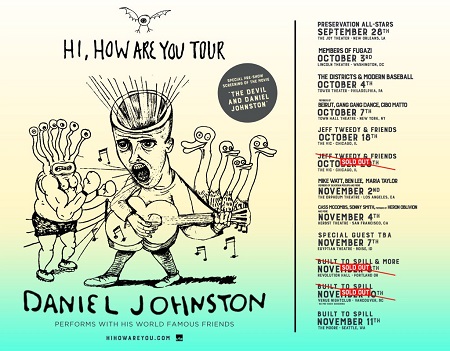 Daniel Johnston recently launched his final tour backed by a rotating assortment of bands / musicians who have been influenced by his work. So far, Johnston has been joined by Fugazi, Jeff Tweedy, Mike Watt, Ben Lee, Maria Taylor, and members of Silversun Pickups. On November 8th, 10th and 11th, Built to Spill will back Johnston on his Portland, Vancouver and Seattle gigs.  A possible setlist has been posted below.

Built to Spill:
“Here’s the songs we’re learning for the Daniel Johnston shows.”