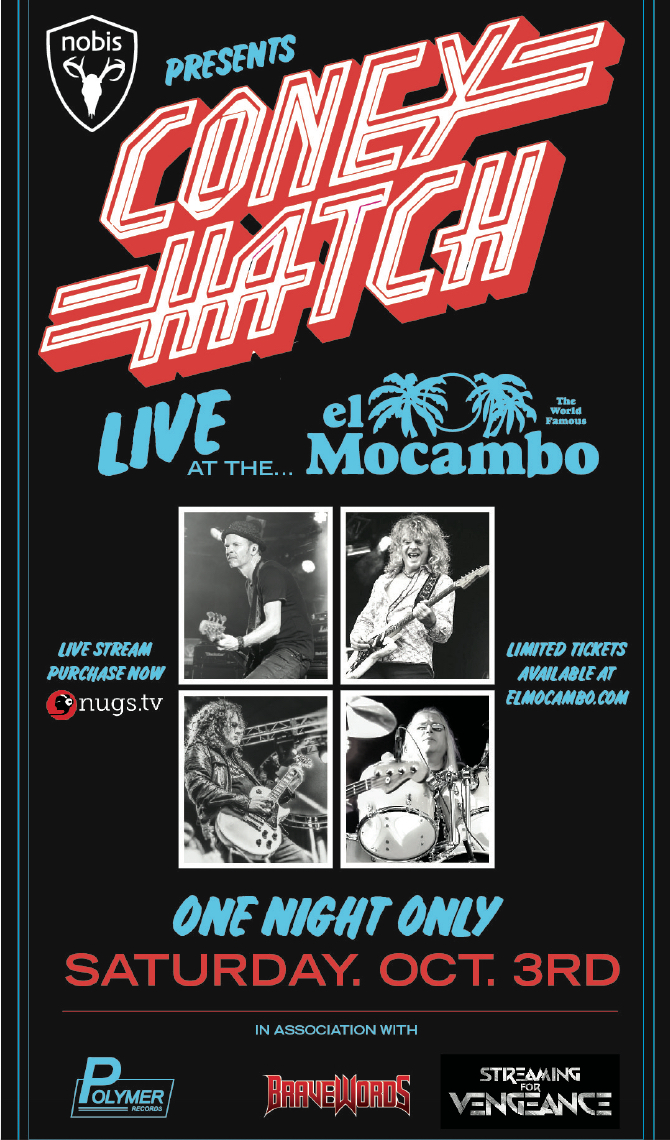 CONEY HATCH TO PLAY THE LEGENDARY EL MOCAMBO IN TORONTO

The band (lead vocalist and guitarist Carl Dixon, vocalist and bassist Andy Curran, guitarist Sean Kelly, and drummer Dave Ketchum) returns to the legendary El Mocambo in Toronto for the first time since 1983.

The concert will feature music from all four of their studio records spanning a 30+ year career, and will be recorded for a future release on vinyl and CD which also marks the first-ever Coney Hatch live record release.

“Michael Wekerle – the CEO of the El Mocambo – is a very big Coney Hatch fan, and invited us to be one of the first bands to perform at the new renovated venue in Toronto,” explains Curran. “The El Mocambo is easily the safest venue in Toronto. It’s become the poster child for COVID safety procedures and the city of Toronto did a live stream event on Canada Day and helped pave the way for them. Tables and chairs are all laid out with social distancing regulations in place – with 50 people only on two floors, staff all wearing masks, sanitizers everywhere, temperature taken when entering…they really have gone to great lengths to make artists and patrons feel safe.”

“We paid special attention to all four studio records and chose a mixture of fan and band favorites…kind of a ‘best of Hatch’ night with some cool visuals we’ve added, plus a 30 minute interview with me and Carl, hosted by Metal Tim Henderson – poking and prodding us about our past , present, and future!”

And speaking of the future, the bassist offers this preview of the upcoming live release – “This show will be recorded and filmed for an upcoming Coney Hatch vinyl release. We’ve never released a live record and we feel that our live show is at a different level…so it’s long overdue. Since we’ve been playing in Europe over the last few years and our mini Canadian tour with Steve Harris’ British Lion, there seems to be renewed interest in the band, so, we’ll take it!”

Pre-order your copy with the option to bundle a special limited edition Coney Hatch El Mocambo exclusive event T-shirt @ this location. Proceeds from every live stream purchase, in-person ticket, and T-shirt purchase will go towards the Unison Benevolent Fund to aid the Canadian music community.