Chris Slade,”Thanks For This @Rockstarscars Haven”t Seen It For Years! Actually This Was A Joke!” 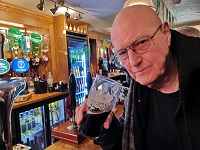 Chris Slade: “Thanks for this @Rockstarscars Haven”t seen it for years!  Actually this was a joke!  It was in the very early days, before ‘It”s Not Unusual’ was recorded.  None of us had any money, we saw this car in the street and just posed with it… Like you do!”

Heres a pic of Tom Jones and his E-type, its probably been posted before. It’s not unusual…. ?what a great pic though! Wonder how long Tom had the car and if the car still exists? pls RT #SplinedHub will love this! pic.twitter.com/Quza1wD0fW

Chris Slade is currently the drummer for AC/DC, but has also played with Tom Jones, Manfred Mann’s Earth Band, The Firm and Asia.

That’s ace! Wonder who’s car it was ? Would love to chat about your cars Chris…