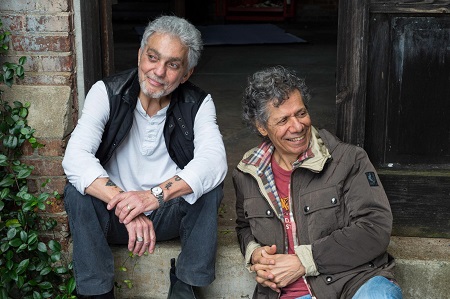 Chick Corea and Steve Gadd will be performing at this year’s Berklee Beantown Jazz Festival on Sunday, October 1, 2017 @ 7:30PM.

The musical partnership between Chick Corea and Steve Gadd is the stuff of legend. But the music is always new. Since Gadd became the very first electric Return to Forever drummer, these two have turned out one game-changing record after another: The Leprechaun, My Spanish Heart, Three Quartets, and Friends. Co-leading a band for the first time, they pick up where they left off, this time with young stars filling out the lineup: Lionel Loueke, the Beninian genius, on guitar; Steve Wilson, Corea’s Origin protégé, on saxophone and flute; the great Carlitos del Puerto on bass; and Venezuelan master Luisito Quintero on percussion.

w/ Steve Gadd crate-digging in Japan, circa 1984. Who can name all those records in the background?”

Chick and Steve Gadd, crate-digging in Japan, circa 1984. Who can name all those records in the background? #tbt #tbthursday #stevegadd #chickcorea

Steve Gadd is a highly regarded session and studio drummer.  His drumming can be heard on Paul Simon’s “50 Ways to Leave Your Lover” and Steely Dan’s “Aja.” In addition to working with Chick Corea, he has also worked with popular musicians from many genres, including Al Di Meola, Simon & Garfunkel, James Taylor, Eric Clapton, Joe Cocker, Grover Washington Jr. and Lee Ritenour.

Dr. Steve Gadd, in between sets at the Blue Note, NYC. The Corea/Gadd Band has been killing it twice nightly. #stevegadd #chickcorea #bluenote @bluenotenyc