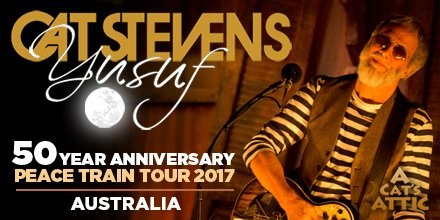 Cat Stevens / Yusuf just announced a string of 2017 Australian tour dates.  This will only be the third time the singer has toured the country in his entire career, with 2010 being the first time in 36 years. The “Peace Train Tour” begins in November and marks the 50th anniversary of the release of his first album, Matthew and Son. The 1967 debut was a top 10 album in the UK, and the title track made it to #2 on the UK Singles Chart. The album also has the distinction of featuring John Paul Jones on bass, two years before Jones became a member of Led Zeppelin.

In 2014, Cat Stevens released the album, Tell ‘Em I’m Gone, and soon embarked on his first US tour since 1978….and then in 2016, the singer performed twelve North American ‘intimate venue’ dates, but managed not to come within 1000 miles of me, come on, man!!