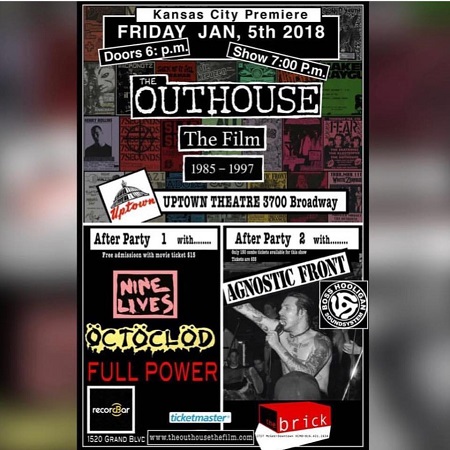 Agnostic Front will be playing the after show party at the premiere of The Outhouse The Film 1985-1997 tonight (January 5th) at the Uptown Theatre in Kansas City.  The Outhouse was a hardcore punk music venue located east of Lawrence, Kansas, United States on 15th Street.

The Outhouse The Film 1985-1997. In the mid-1980s outside this college town, home of the Kansas Jayhawks, punk rock history was being made in the middle of a cornfield. Where the pavement turned to gravel, in a small, primitive cinder block building, bands like Fugazi, the Melvins, Rollins Band, Gwar, the Circle Jerks, Body Count, Social Distortion, Bad Brains, White Zombie, Descendents, Sonic Youth, Green Day, Fishbone, the Meat Puppets, Helmet and Nirvana played to all-ages crowds, a raucous scene of misfits and anarchists on the margins of youth culture. This was The Outhouse. Small, dark and sometimes dangerous, it quickly gained a reputation as a haven for the bands other venues were afraid of, and the kids who loved them.

Including interviews from the bands, the people who attended the shows, the neighbors , the cops, all involved. Live footage , photos, database of flyers.