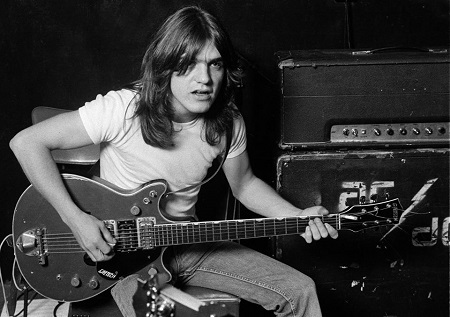 AC/DC guitarist and co-founder Malcolm Young has died. In 2014, AC/DC announced that Young would be taking a break from the band. It was later revealed that the guitarist had been battling dementia. He was 64 years old. Statements from the band and his brother/bandmate Angus Young have been posted below.

Statement from AC/DC:
“Today it is with deep heartfelt sadness that AC/DC has to announce the passing of Malcolm Young.
Malcolm, along with Angus, was the founder and creator of AC/DC.
With enormous dedication and commitment he was the driving force behind the band.
As a guitarist, songwriter and visionary he was a perfectionist and a unique man.
He always stuck to his guns and did and said exactly what he wanted.
He took great pride in all that he endeavored.
His loyalty to the fans was unsurpassed.”

Statement from Angus Young:
“As his brother it is hard to express in words what he has meant to me during my life, the bond we had was unique and very special.

“He leaves behind an enormous legacy that will live on forever.
Malcolm, job well done.”

Official Statement:
“It is with deepest sorrow that we inform you of the death of Malcolm Young, beloved husband, father, grandfather and brother. Malcolm had been suffering from dementia for several years and passed away peacefully with his family by his bedside.

“Renowned for his musical prowess Malcolm was a songwriter, guitarist, performer, producer and visionary who inspired many. From the outset, he knew what he wanted to achieve and, along with his younger brother, took to the world stage giving their all at every show. Nothing less would do for their fans.

“While thanking all for their overwhelming support and heartfelt condolences, the family ask that you respect their privacy during this time of heartbreak and grief.

“For those wishing to send messages to the family please visit the Sydney Morning Herald Malcolm Young Memorial website which will be available next week.

“The family have asked instead of flowers to send donations to The Salvation Army.”

Statement from Brian Johnson:
“For 32 years we stood side by side on stage: I am saddened by the passing of my friend Malcolm Young. I can’t believe he’s gone. We had such great times on the road. I was always aware that he was a genius on guitar, his riffs have become legend, as has he. I send out my love and sympathy to his wife Linda, his children Kara and Ross, and Angus, who will all be devastated… as we all are.

“He has left a legacy that I don’t think many can match. He never liked the celebrity side of fame, he was too humble for that. He was the man who created AC/DC because he said, ‘There was no Rock ‘n’ Roll’ out there’. I am proud to have known him and call him a friend, and I’m going to miss him so much. I salute you, Malcolm Young.”

Eddie Van Halen:
“It is a sad day in rock and roll. Malcolm Young was my friend and the heart and soul of AC/DC. I had some of the best times of my life with him on our 1984 European tour. He will be missed and my deepest condolences to his family, bandmates and friends.”

Stephen King:
“RIP Malcolm Young. Sweet, quiet man. Made all his noise with his guitar. AC/DC night at my house, and loud. Rock and roll ain’t noise pollution.”

Keith Richards:
“Malcolm was one of the great riff masters and one of the greatest rhythm
guitar players of all time. We are all going to miss him dearly. My condolences to Angus and all the family.”

Slash:
“This is a monumentally sad day in Rock n Roll. RIP Malcom Young Take a moment of silence in his memory.”

Pete Way:
“I’m so shocked to hear about Malcolm today. We both grew up playing Rock N’ Roll together and you, Bon and Angus helped keep me on the right path. No one plays rhythm guitar like you! I will miss you brother!”

Ozzy Osbourne:
“So sad to learn of the passing of yet another friend, Malcolm Young. He will be sadly missed. God Bless AC/DC.”

Geezer Butler:
“Sad news about Malcolm Young. Dementia is such a horrible disease.”

Bill Ward:
“RIP Malcolm Young.
Very sad news. Thanks, Malcolm for all the great music. Our condolences to the family, friends and fans. Mr. and Mrs. Bill Ward.”

Fred Gretsch:
“rip malcolm. RT @GretschUSA: Malcolm, with the deepest respect & gratitude, WE Salute YOU. Your legacy will forever live on.”

RIAA:
“Sad news. What a talented musician. As Billboard notes, ‘Back In Black’ is one of the top certified albums OF ALL TIME. #RIPMalcomYoung #legend AC/DC’s Top 10 Albums: ‘Back in Black,’ ‘Highway to Hell’ & More | Billboard”

Alex Lifeson:
“Finally, peace comes to Malcolm. His guitar playing will endure for generations to come and that is a worthy legacy.”

Joe Walsh:
“I heard Malcolm Young has died. He was and always will be one of the top 10 greatest. My heart goes out to the entire AC/DC family.”

Carmine Appice:
“RIP. Malcom Young. To young. To leave this earth prayers go out to his family. Sad. !!”

Lars Ulrich:
“Malcolm,
Thank you for being an integral part of the soundtrack to my life. Your music is the definition of timeless and inspiring.
RIP.”

Bryan Adams:
“RIP Malcolm Young. Your guitar playing was a huge inspiration. Thanks for that.”

Dave Meniketti:
“Malcolm Young was such a force in the rock world. His songwriting, distinctive rhythm sound, & skillful chops played such a huge part in AC/DC’s greatness. I feel very fortunate to have had the opportunity to tour with this iconic band in decades past. Memories I treasure. RIP”

Dave Mustaine:
“Malcolm is gone, and although his music lives on, there are no words to express this sadness. Bittersweet as it is, I’m happy he’s free from the dementia and in Heaven with Bon and his brother George. I owe so much to Malcolm Young and his amazing talent. Malcolm, you are my hero, and I will see you one day in Heaven.”

Scott Ian:
“Malcolm had an intensely powerful, percussive and economic style of playing that made him the greatest rhythm guitarist of all time. His uncanny ability to wring only the necessary notes out of his Gretsch was what made AC/DC – his riffs, feel and tone the soul of that band. What he means to me is unquantifiable. I am a rhythm guitarist because of Malcolm Young, he lives with me always and I hope to honor the man and his legacy every time I play. And now I’m going to crank Riff Raff and play along. My condolences to his family and friends.
Cheers and RIP Malcolm Young.”

Alex Skolnick:
“Farewell Malcolm Young. One of the great riffmasters of all time, his loss sadly follows his and Angus’s older brother George – a ‘60s pop legend and also AC/DC’s original producer – who passed away last month almost to this day. Of the two onstage Young brothers, Malcolm was the quiet one, if not in volume, in terms of onstage antics. Like Alex Van Halen, he provided the fraternal foundation of which a great band was built upon and made it possible for his lead guitar playing brother to reach full potential – competing for the spotlight with charismatic singers (in Angus Young’s case, becoming the very mascot of the band) and becoming lead guitar personified for generations of listeners – yet always coming across as more than content as the supportive brother, never seeking undue attention and holding it down with dignity. Malcom had no distinctive outfit. Malcom had no signature stage moves. He didn’t need them. He had the riffs and he did them better than nearly anyone. Who else in heavy rock could play a Gretsch White Falcon – a guitar associated more with rockabilly (ie Brian Setzer) – and pull it off? For many of us, Malcom was our real life version of the fictitious “Guitar George” in Dire Straights’ The Sultans of Swing “He knows all the chords… he’s strictly rhythm he doesn’t want to make them cry or sing” His riffs for AC/DC will go down in history alongside Jimmy Page’s for Led Zeppelin, Tony Iommi’s for Black Sabbath or anyone else’s. Malcom gave us many great measures of music and he will be missed immeasurably. RIP”

Ryan Adams:
“RIP Malcolm Young
Legend.
He was the founding member of AC/DC & the engine that roared behind the most powerful band in the world.
He wrote Back In Black, Highway to Hell, You Shook Me All Night Long, Highway to Hell, so many songs…
Travel safely to the stars, Malcolm.
Legend.”

Julian Lennon:
“Sad to hear of Malcom’s passing…AC/DC were the first band I ever went to see LIVE…(With Bon Scott)”

Paul Stanley:
“The driving engine of AC/DC has died.A tragic end for a sometimes unsung icon. One of the true greats. RIP.”

Gene Simmons:
“Malcolm was a good man. Always a kind hearted soul. finally recall when we took out AC/DC on their first American tour. It will be sadly missed. RIP.”

Tom Keifer:
“This man inspired more rock & roll than the world will ever be able to measure. His infectious crunching riffs, iconic Gretsch & Marshall tone made him one of a kind. The epitome of true, badass rock & roll.
Thank you for the inspiration.”

Nikki Sixx:
“Heavy heart hearing of Malcolm Young’s passing. Not only did he co-found one of the greatest bands in the world he co wrote the songs that inspired many of us to wanna be in a band. Condolences to his whole family,band mates and fans. RIP bad ass.”

Joe Elliott:
“I’m sad to hear of the passing of Malcolm Young. It was great to get the opportunity to open for AC/DC on the Highway To Hell tour & we certainly learned a thing or two. He was an incredible guitar player & the glue for that band onstage & off. RIP Malcolm, say hi to Bon.”

Rick Allen:
“RIP Malcolm Young… Thank you for the music… Condolences to his Family & friends ??”

Spoon:
“Malcolm Young, one of the best to do it”

Dropkick Murphys:
“We are deeply saddened to have heard the news of the passing of Malcolm Young from AC/DC. Malcolm was the heart and soul of AC/DC and as fine an example as any to rhythm guitarists everywhere. Rock In Peace, Malcolm. Hope we see you up there.”

Foghat:
“Rest in peace Malcolm Young. Our thoughts are with his friends, fans and family.”

Overkill:
“Such sad news, RIP Malcolm Young. We Salute You!”

Joey Vera:
“A global original. His DNA is in all of us. Malcom, thank you for the songs, the power in those chords, that sound. That sound! RIP Malcom Young”

Ginger Wildheart:
“Just landed in Paris and heard about Malcolm Young passing away. He was the reason I wanted to play rhythm guitar. Toured with him and he was genuinely lovely. The world has lost a true champion.”

Mike Portnoy:
“Wow…just got off stage here in Brisbane Australia (of all places) to the shocking news of Malcolm Young’s passing. So sad…one of the great rhythm guitar players of all time. (James Hetfield and Scott Ian would be the 1st to say so themselves…)”

This goes out to Malcolm Young.
He will be sorely missed. pic.twitter.com/gO1mWVuDeR

A sad loss ~ Malcom was a lovely guy and will be really missed xx pic.twitter.com/nTNc0yFZ7m

Thank you, Malcolm for the songs, and the feel, and the cool, and the years of losing control to your rock and roll. I will do just that tonight, for you. pic.twitter.com/dnwm1uRFqd

ANGUS: “Mal’s a way better guitar player than me. The only reason he doesn’t play lead is because it would interfere with his drinking!”
Rest in peace Malcolm. pic.twitter.com/cesSHLywT6