The Mynabirds just announced 3 new promo shows (listed below) for their forthcoming album Be Here Now, out August 25, 2017 via Saddle Creek Records. The new track, “Cocoon”, has been embedded above. 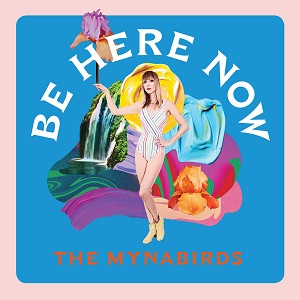 Be Here Now, is a collection of 9 songs written and recorded in just 2 weeks in January 2017 following the Inauguration and the Women’s March. Singer Laura Burhenn worked with producer Patrick Damphier in his Nashville studio (which he was being evicted from to make way for luxury condos) to document the news and peoples’ intense emotional responses to it all in real time. No stranger to politics in her songwriting, Laura aimed to speak from the voice of the collective consciousness in a work of “Emotional Journalism,” singing the heartbreak, anger, exhaustion and resolute hope she witnessed during the Muslim travel ban, the final stand at Standing Rock, and every other news story that rattled America in that period. The album vacillates in style and feel to reflect a frayed nation, featuring a Burundian refugee choir on one song, and a cacophony of dissonant saxophones in a new national anthem on another. It is the last recording made in that space.

American singer-songwriter Laura Burhenn is a shape-shifter who can’t sit still. Since 2010 she’s worked under the moniker The Mynabirds, releasing three critically acclaimed and stylistically different albums on Saddle Creek: What We Lose in the Fire We Gain in the Flood (2010) and GENERALS (2012), both produced by Richard Swift, and Lovers Know (2015). She has also toured as a member of the Postal Service (2013) and Bright Eyes (2011), helped found Omaha Girls Rock (a non-profit helping young girls and their voices), and in 2013 gave a TED talk based on her “New Revolutionists” portrait project, exploring what it means to be a revolutionary woman in this day and age. Before The Mynabirds, Laura was a member of DC indie band Georgie James with Q And Not U’s John Davis, and also put out two self-produced solo albums on the label she founded herself, Laboratory Records.