Heavy metal legends SAINT VITUS have announced a European headlining tour. The tour kicks off on April 28 at Desertfest in Berlin, and includes appearances at Desertfest London, Fall of Summer Festival, and more. A full list of confirmed tour dates can be found below. 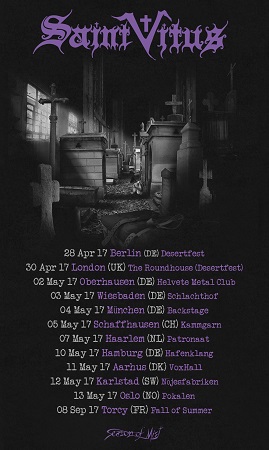 In addition to the CD and Double LP versions that are available worldwide, a deluxe edition of ‘Live Vol. 2’ is also available, exclusively from Season of Mist. This deluxe version is available as a double CD and triple-LP with the rare live album “Marbles in the Mosphit” as the second CD and third LP respectively. “Marbles in the Moshpit” features a killer performance recorded live on December 20, 1984 in Ontario while the band was supporting BLACK FLAG. The album features the classic SAINT VITUS lineup (Dave Chandler: guitar, Scott Reagers: vocals, Mark Adams: bass, Armando J. Acosta: Drums) performing VITUS classics such as “Hallow’s Victim”, “White Magic/Black Magic”, “White Stallion”, and more. 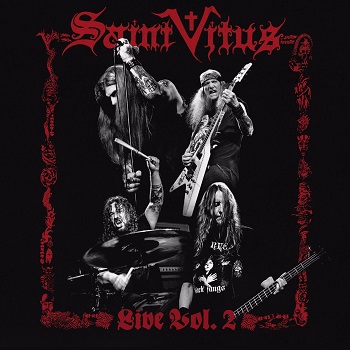 “ …the boys are on fire here, flush with renewed energy and basking in the glow of their new-found power.” – Pitchfork

“This sick behemoth of a sound – and patented strangled-cat guitar solos – could only come from one band, and that’s a window into why Lillie: F-65 succeeds as a whole: the Saint Vitus Character remains intact, never fucked-up with modern contrivances. Doubtful that Sabbath’s own 2012 comeback will be even a faction this good.” – Decibel

“…it’s clear that their chops have only increased in the intervening years, and they certainly haven’t lost their ability to bring dynamics to a slothful sub-genre.” – Outburn

“ …Vitus shows the enduring significance of their approach, and that what proved true about them in their initial run is no less true now: By not being of their era, they were and remain timeless. …Saint Vitus are more relevant now than they’ve ever been, and Lillie: F-65 shows a good deal of why. No doubt one of 2012’s landmark albums. Highly recommended.” – The Obeslisk