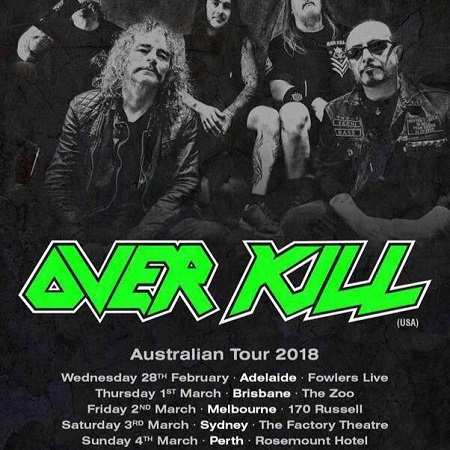 Thrash titans Overkill will embark on a 2018 tour of Australia set to kick off on February 28th in Adelaide at Fowlers’ Live.  The 5-date trek will also stop in Brisbane, Melbourne and Sydney before wrapping up on March 4th in Perth at the Rosemount Hotel.   A list of dates can be found below.

Overkill released their eighteenth studio album, The Grinding Wheel, on February 10, 2017.  The album debuted at #69 in the United States on the Billboard 200 chart, making it the second highest position of Overkill’s career (its predecessor, White Devil Armory, peaked at #31 in 2014).