Kreator’s classic albums ‘Endless Pain’, ‘Pleasure To Kill’, ‘Terrible Certainty’ and ‘Extreme Aggression’ have been remastered and will be re-released on June 9, 2017 with plenty of bonus material, retouched artwork and liner notes from vocalist / guitarist Mille Petrozza. The albums will be available on 180 gram vinyl with gatefold, CD and digital. You can pre-order them at this location or at a retailer you prefer. 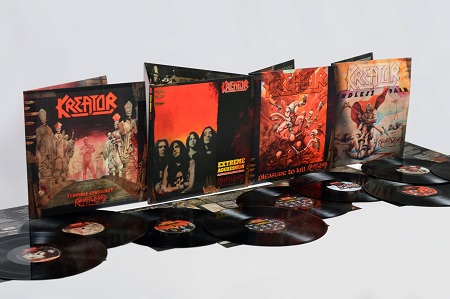 Endless Pain – 2LP & CD
Endless Pain was released in October 1985 by Noise Records. It was a savage debut; its crude thrashing quickly had the underground metal world abuzz with excitement. This album has been known to be viewed as a pivotal album to black metal bands that enjoy thrash metal elements, ultimately creating a thrash-influenced black metal sound. 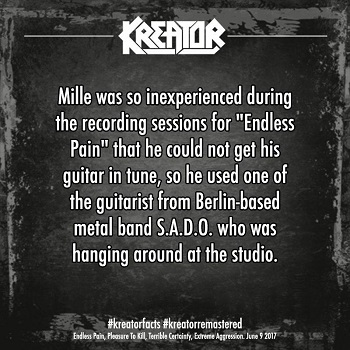 This version also contains the band’s original demos when they were still known as Tormentor, one fittingly named Blitzkrieg (1983), and the other End of the World (1984). These fell into the hands of thousands of heavy metal fans engaging in the era’s bustling underground tape-trading network. Positive word of mouth soon attracted the attention of Germany’s own metal start-up, Noise Records, which signed the newly re-christened Kreator to a deal. This album presented in CD / LP / Digital format contain re-mastered versions by Andy Pearce and overseen by Mille Petrozza. New art has been created packed with rare photos and memorabilia and notes by Mille and Malcolm Dome (Metal Hammer) talking about the creation of the albums. 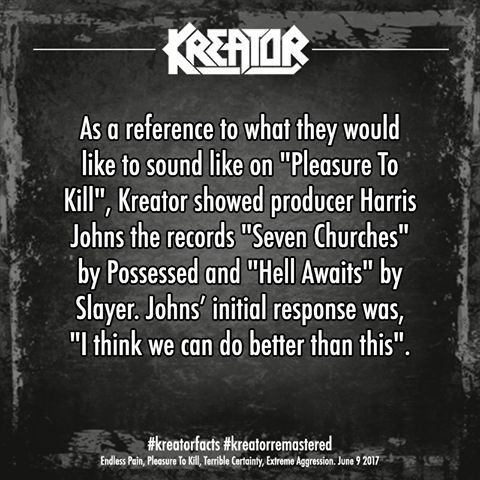 Pleasure To Kill – 2LP & CD
Pleasure to Kill, the second studio album by Kreator, was released in November 1986 originally by Noise Records. The lyrical themes follow those found on their first album. 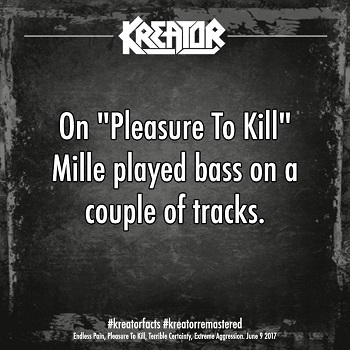 Unleashed in 1986 and still considered the band’s first “classic” album, Pleasure to Kill raised the bar with more diversity of tempos and greater attention to technical execution, while losing nothing in terms of ferocity or speed. The band closed out the year with the Flag of Hate EP (named after a re-recorded version of their earliest hit) which is included on this version.

Many death metal bands cite this album as an influence. Pleasure to Kill is widely considered a thrash classic. It is also considered a landmark album in the history of thrash metal along with Master of Puppets by Metallica, Reign in blood by Slayer and Darkness Descends by Dark Angel, all released in 1986. 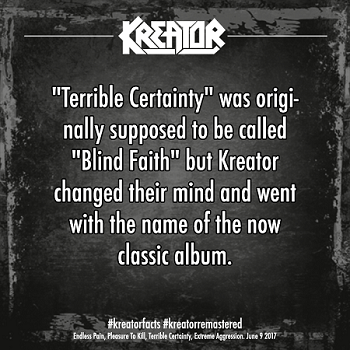 Terrible Certainty – 2LP & 2CD
1987’s Terrible Certainty did nothing to dent the perception that Kreator were one of the genre’s best bands, and for once, Petrozza had a little time to work out the songs beforehand.

Kreator beefed up to a quartet once again with the addition of guitarist Jörge Trebziatowski.

This version also contains the Out of the Dark…. Into the Light EP which was originally released in 1988. The live tracks were recorded at Dynamo Club, Eindhoven, Netherlands, in 1988. 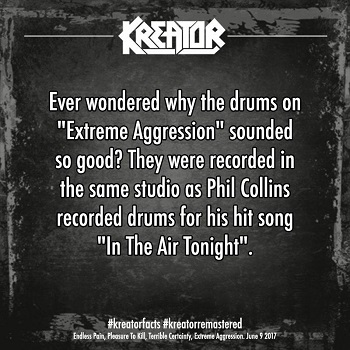 Extreme Aggression – 3LP & 2CD
The Fourth album by Kreator, Extreme Aggression was released in 1989. This album introduced many American fans to Kreator, primarily through heavy rotation of the “Betrayer” music video on MTV’s Headbangers Ball, which was partly shot at the Acropolis in Athens, Greece. 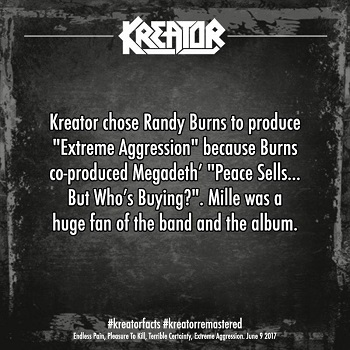 On Extreme Aggression, Kreator closes the ’80s by delivering their final thrash triumph. With the most hallowed Kreator line-up joining forces once again to follow up the spectacular Terrible Certainty. The results are fierce and noisy on this 1989 Epic release.

Extreme Aggression quickly became their biggest seller yet, and the subsequent North American tour with Suicidal Tendencies introduced the band to many new friends. This version contains a show recorded in Berlin in 1990 that showcases the band in full flight.