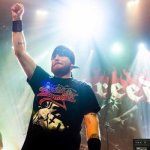 Jamey Jasta: Besides Dee (Snider) & (Sebastian) Bach who still REALLY has the pipes?! No tapes! Who can actually belt em out? Sadly not JBJ.

Sunday’s show delivered pretty much everything you’d want from a Bon Jovi concert with one major exception — some shockingly poor vocals from Jon Bon Jovi. He’s never been a particularly technical singer and his voice has lost some power over the past decade. But Bon Jovi didn’t just miss a note here or there, he struggled throughout the two-plus hour show. Nothing from his past suggested such a sudden decline was coming.

He wasn’t just butchering the older stuff, which the band now plays in a lower key, but the fresh material as well. And weirdly enough, at times it sounded like he was trying (and failing) to emulate Axl Rose in his prime. Quite frankly, it felt like he had forgotten how to sing.

Not to put too fine of a point on it, but one can’t help but wonder why no one in the Bon Jovi organization sat the guy down for an honest chat. I guess it’s because he’s the boss and no one wants to cross him? He’s always been the face of the group and, in the time since Sambora left, he’s taken full control. He’s the only band member who writes songs (many with Shanks and other producers) and the cover of “2020” is a solo shot of Bon Jovi looking somber in shades.

Read the entire review @ this location.

Previous: Ace Frehley’s Original Hand-Drawn KISS Logo from 1973 Up for Auction – 2022
Next: Dee Snider on the Twisted Sister ‘Bone Logo’ Designed by His Wife: “She was never paid a dime!!”