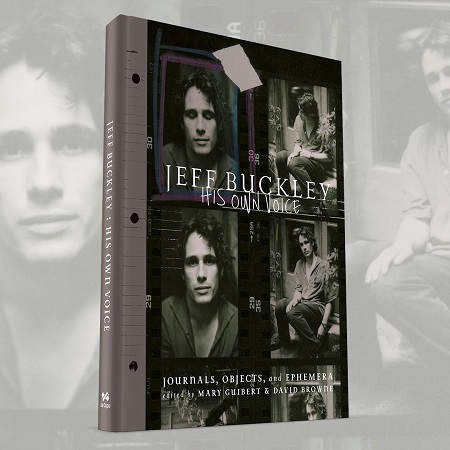 The publication of Jeff Buckley: His Own Voice. This beautiful book brings together Buckley’s never-before-seen journals, notebooks, letters, and unpublished lyrics. The book is on sale 10/15 and is available for pre-order at this location.

JEFF BUCKLEY
His Own Voice

The journals and notebooks of Jeff Buckley, the late singer best-known for the definitive version of “Hallelujah” and his classic album Grace, including dozens of evocative photos of his personal effects and ephemera.

In 1994, an artist named Jeff Buckley released Grace, his debut album. Hailed immediately by the likes of Bono, Jimmy Page, and Robert Plant, Buckley was a singer, guitarist, and writer of uncommon range, sensitivity, and power. The executives who signed him to Columbia Records saw Buckley as part of the label’s legacy of enduring talents like Bob Dylan, Bruce Springsteen, and Miles Davis–an artist for the ages. Three short years later, at the age of 30, Buckley tragically drowned in Memphis, but his legend and stature have only grown in the years since.

For much of his life, Buckley diligently kept journals chronicling his goals, inspirations, aspirations, and creative struggles. These diaries amount to one of the most insightful life chronicles any musical artist has left behind. Jeff Buckley: His Own Voice will mark the first-ever publication of Buckley’s handwritten account of his journey. Combined with reproductions of other memorabilia–including letters, notes, and unpublished lyrics–the book will take readers and fans deep into Buckley’s mind and life.