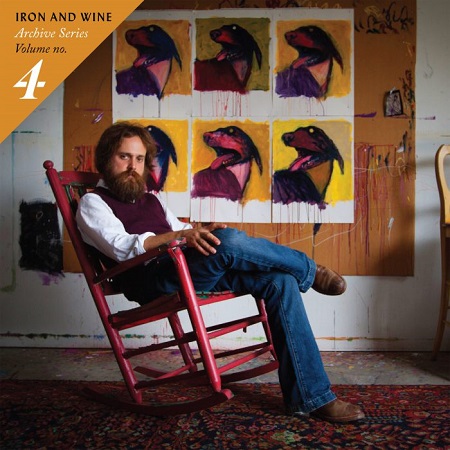 In commemoration of the 10th Anniversary of The Shepherd’s Dog, Black Cricket Recording Co. is proud to offer Archive Series Volume No. 4 as a limited edition tour only gold vinyl pressing. Known to most fans as most of “The Shepherd’s Dog Acoustic,” the tracks were initially recorded as a free download shortly after its release 10 years ago. The tracks were shared again last month for 24 hours as a celebration of the 10 year anniversary.

Black Cricket Recording Co. is the exclusive home to the ongoing Iron & Wine Archive Series which features material that has been at times bootlegged, shared online or never before released.

Side A:
1. Innocent Bones
2. Boy with a Coin
3. The Devin Never Sleeps
4. Flightless Bird, American Mouth

Side B:
5. Peace Beneath the City
6. Resurrection Fern
7. Pagan Angel and a Borrowed Car
8. Lovesong of the Buzzard

Archive Series Volume No. 4 is available to purchase on all US tour dates at the merch booths.