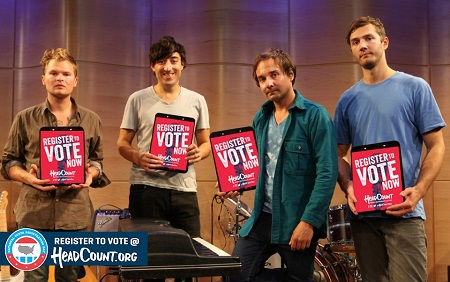 Grizzly Bear is giving away 2 tickets to every show. Head to their Facebook page to learn more.

Official Statement:
“We care a lot about people feeling safe, well-educated, healthy, + full of opportunity. So this year, we’re excited to partner with Plus 1 + HeadCount to stand up + be a part of change for democracy. We’re hoping you’ll get involved too ✅!
We’ll have HeadCount and some of our favorite organizations at each U.S. stop on the tour, supported by $1 from each ticket. + to get things started, we’re GIVING AWAY TWO FREE TICKETS to every show.

“COMMENT (or even share a pic/video) on what issues are most important where you live. Climate? Access to affordable healthcare? Jobs? Tuition Debt? Tell us what issue gets you going + why, + what show you’d like to attend (date + city). We’ll pick our favorites, + have you at a show as our guest.”