Former Pantera vocalist Terry Glaze was recently interviewed on our Full in Bloom Podcast. During the interview, Glaze talked about Pantera bassist Rex ‘Rocker’ Brown’s recently published memoir, Official Truth, 101 Proof.  Several excerpts from the interview have been transcribed below.

full in bloom:  You were in there a couple of times.  Yeah, you had some quotes in there.  But in it, Rex absolutely reams Vinnie (Paul).  You know Vinnie, right after (Dimebag) Darrell died, Rex had said some kind of comment that pissed Vinnie off and Vinnie had responded with, ‘if anyone got lucky in the band, it was Rex.’  I was just wondering….he makes him (Vinnie) sound like he was so difficult.  At that time, at least when I was a kid, Vinnie, the times I met him, was incredibly cool.

full in bloom:  Right.  I mean, to go after him like that, it just seems like it was a vendetta.

Terry:  I saw Vince at Darrell’s funeral and all I know is, I can’t imagine what Vince has to go through every single day when he wakes up and I don’t even want to know.   If anyone deserves a break, I would think it would be Vince.  I just couldn’t imagine.

full in bloom:  I’m also assuming that Rex didn’t write a lot of the music, right?

Terry:  Not that I remember.

full in bloom:  How would you describe Vinnie at that time?

Terry:  I don’t think anybody was difficult when there was no money involved and we were just doing it because we loved it.  Everybody was pretty easy.  I can’t imagine how hard it might have been once finances got involved.  That’s usually where the difficult part comes in, once they started getting really big.  That would be my guess.

full in bloom:  You said in the book that Phil (Anselmo) came up to you on the bus and said ‘I know what you were going through.’

Terry:  Well, something similar to that.  Phil and me understood the other three like nobody else (laughs).  I was a big fan of Phil on those records.  I thought he was amazing.  My favorite Pantera record was Vulgar Display (of Power).

full in bloom:  Is that why you left?  Because of the dynamic between the three of them?

Terry:  No, the reason I left is because the four of us, plus Vince and Darrell’s father (Jerry “The Eldn” Abbott), we all voted and the Abbotts, the three of them, never split their vote and so it didn’t matter what I wanted to do, the Abbotts made all the decisions and eventually I just thought, ‘I don’t like what’s going on.’  That’s why I left…and I’ll just tell you this, I loved playing in that band and we were good.   It wasn’t the two hours on stage, it was the other twenty-two hours of the day that we wanted to kill each other, which is typical for artists.  I loved the music;  I would have had no problem.  It was just getting along when we weren’t on stage.

full in bloom:  It’s funny to look back at the old pictures and even Rex (Rocker), how he’s talking about, ‘I didn’t want to wear spandex.’  I mean, when you look back, he was about the most glam in the band.

full in bloom:  Do you remember the conversation that you had with them when you quit the band?

Terry:  Well, the other problem with Pantera was that I gave them notice, and that was not good because as the last couple of dates came up….I guess I was hoping that we would work it out, but they were not interested in working it out, and as it got closer and closer to my last day, they became colder and colder.   So the last gig was in Wichita Falls and we got done and I loaded my truck and fucking left.  It was really weird.  I guess I thought we would all come together and try to work it out, but that’s not the way it went down.

full in bloom:  Where you guys would work it out and keep the band together?

full in bloom:  How much notice did you give them?

Terry:  I want to say probably two weeks.  About two weeks too long, I’ll tell you that.

You can listen to the entire interview at this location. 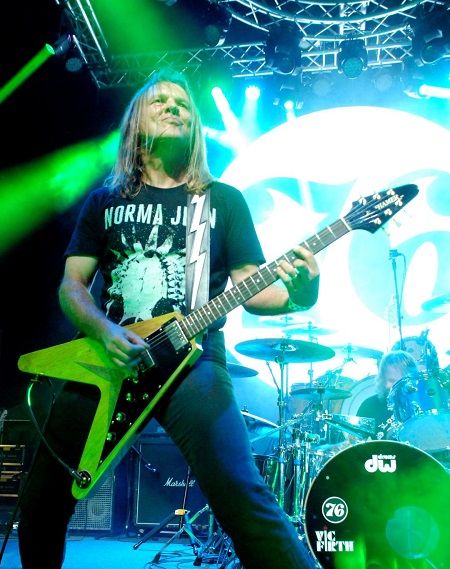